JEEEEEEZUS, It's loud in here!

Just a few random things for you.

The house two doors down from us is undergoing a gut-renovation.  They knew they'd be removing the entire interior, but I think they were a bit surprised when they discovered they'd have to completely replace the roof.  And the entire back wall. And most of the floors. They work from 8:30 or so in the morning til Five-ish.  They're really nice, but they're LOUD. 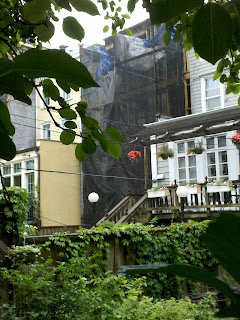 The church five doors down from us in the other direction is being turned into condos.  In addition to  whatever interior construction that requires, they're also putting in a 30 car underground garage and putting up another building in the rear yard.  When they started excavating for the garage, they had a steady procession of larger and larger equipment to deal with the "rock" that turned out to be directly and continuously connected to a small mountain somewhere in Pennsylvania.  I've never met any of these guys, but they too are LOUD.  They, also work during the daytime, so it's not the end of the world.

Then there's the school across the street from us.  They're doing masonry work.  But they "can't" do the work during school hours, so those guys come to work at 4 in the afternoon and work til 11 at night.  And they're chipping and grinding and banging and every other damned thing they can think of to make noise.  Until 11 o'clock every night.  I'm pretty sure there's a guy there whose job is to just bang a couple of cans together.  THEY'RE LOUD.  And they're scheduled to be there for EIGHTEEN MONTHS.  I hate them.

There's another house being renovated next door to the church.  They've been on a stop-and-start schedule for a while now -- depending on when they have money to continue working.  They're mostly stopped.  I've never met them, but I like them a lot.

Some of this may make me a BAD PERSON, but I think I can live with the stigma.

New York has some fairly strict building noise regulations, and the school system doesn't have an exemption.

I'll see if I can get a hold of my construction friend from ABC and check on the hours they are allowed to make noise.

Actually, there IS a permit and it DOES have a variance til 11:00pm.

That doesn't necessarily mean it is valid, I know we (ABC) often had trouble with special variances for GMA, such as a snow making machine.

The house two doors down from us is undergoing a gut-renovation.

Where is the line between renovation and replacement? At some point you cross over into the old juggler's joke about George Washington's axe ("We've had to replace the handle, because it rotted. And we replaced the head, because it rusted. But it occupies the same space!") and the idea that you're "renovating" something becomes purely notional.

I believe they're hanging onto the front facade...before they replace it.

I did a gut renovation of a brownstone in Brooklyn, everything except the brick walls and the floor joists and underlayment went.