And It Only Took Four Years.

Once upon a time, back in January of 2008, I posted about how I'd been shanghaied into being an Extra in a show I was working on - Skins. I also mentioned that one of the Producers was shooting behind-the-scenes footage and interviews and that I'd post the video once he put it online.

Well he just got around to posting it and I'm being really, really timely in bringing it to your attention.

You'll be pleased to know that my part in it is highly embarrassing. Enjoy my mortification. I show up about 30 seconds in. (Also, it's worth noting that it was about 7 degrees on the day we shot this scene.)

If a blogger fails to announce a hiatus when it begins, is it really a hiatus?  Or is it merely 86 days of "too lazy to post anything"?

While I suspect the latter, I'm going to make a case for the former.  Because it makes me look better.

I'm all for making me look better.

There's a wonderful scene -- OK, there are countless wonderful scenes -- in Dr. Strangelove or: how I learned to stop worrying and love the bomb. One of the plot devices used to keep the movie going ---Warning: 48-year-old Spoiler Alert -- is that the Russians have deployed a Doomsday Machine.  In the event of a nuclear attack by the Americans, the Russian missiles will automatically retaliate.  Even if the Russians are completely annihilated and there's no-one left to authorize a counterstrike, the Doomsday Machine will take over and wipe out the Americans to punish them for their temerity.

And once the Doomsday Machine decides that the parameters have been met to initiate a counterstrike, there's nothing anyone can do to change its mind; that's the beauty of the machine.  It's meant to terrify an opponent so thoroughly that they'd never risk authorizing a first strike.  The only problem is that in order for the Doomsday Machine to have the intended deterrent effect, the enemy must be aware of its existence; and the Russians have failed to tell anyone about it. 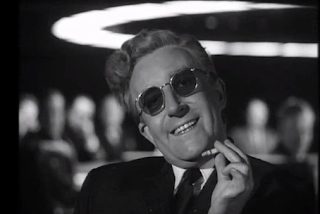 At one point, Dr. Strangelove takes the Russian ambassador to task, saying, "Of course the whole point of a Doomsday Machine is lost if you keep it a secret! Why didn't you tell the world? Eh?

To which Ambassador de Sadesky responds, "It was to be announced at the Party Congress on Monday. As you know, the Premier loves surprises".

I'll readily agree that the Doomsday Machine lost most of its deterrent effect when the Russians failed to publicize its existence, but there's no question that it was still a Doomsday Machine.  So, to stretch the analogy well past its breaking point, I submit to you that, whether or not it was announced, my recent hiatus was still, clearly, a hiatus.

That's my story and I'm sticking to it. I come off looking better that way.

Now that I've gone all twisty and sweated to pound a square peg into a round hole, all in service of making myself look all shiny and admirable, I'll go ahead and squander any good feelings I may have engendered.

Because...I may have been a dick recently.

Here's the deal.  Almost a year ago, I stopped smoking in the house.  Granted, that's not the same thing as stopping altogether, but it does make me go to some effort and its probably cut my smoking in half.

So recently, I started noticing cigarette butts on our back patio. They're not my cigarette butts.  I keep a butt can back there.  And the butts I've been finding on the ground are roll-your-own types. (No, they're not from joints -- I do know the difference.) And I jumped to a conclusion about who the culprit might be.

Ya'see, the guy who lives on the third floor next door occasionally goes out onto his fire escape to smoke. Yes, the same neighbor who owns the Asshole-French-Cat-Who-Shits-In-Our-Backyard. So, I concluded that if you a.) smoke on your fire escape, overlooking our back patio, and b.) own an Asshole-French-Cat-Who-Shits-In-Our-Backyard, and c.) you are, yourself, French, the odds are very good that you may be the asshole who rolls your own cigarettes, smokes them on your fire escape and tosses the butts onto our back patio.

So, in a fit of pique, I picked up a half-dozen or so of the offending butts and tossed them over the fence.

Later, that same day, I remembered that the people who live on our third floor have a friend who occasionally smokes on the fire escape when he visits.

I honestly don't know who the culprit is, and lacking any more evidence, I'm not inclined to confront anyone over it. So, the options are as follows:

1. I've been a total dick, who punished the owner of the house next door in a decidedly passive-aggressive fashion for something that is not only not her fault, but isn't even the fault of her tenant. Or,

2.  I've been a partial dick, who punished the owner of the house next door in a decidedly passive-aggressive fashion for something that is not directly her fault, but is the fault of her tenant.


I feel terrible. I feel the need to atone.  So, here, publicly*, I'd like to offer my wholehearted apology and admit that I may** have been a dick.

**There's always the possibility that my neighbor wrote it into the third-floor tenant's lease that they are required to roll their own cigarettes, smoke them on the fire escape, and toss the butts onto our patio.  And to have their asshole-French-cat shit in our yard.
Posted by Nathan at 9:24 AM 4 comments