I hate to sound like a jingoistic 'Murikin, but I seem to be running across issues with foreigners quite a bit lately.  It's not my fault.  They're coming here and stealing my sanity.

We'll start with the easy one.

I keep seeing ads for the movie Rock of Ages which is opening in a week or so.  I have no idea who this movie is for.  First, there's the cast.  Aren't you supposed to cast people who are the age of the people they're portraying during the time period of the movie?  I suppose that's a quibble, but if you want to be creeped out by Dee Snider at his present age, you can watch this commercial.*


Edited to add 6/12/12: I find this image so horrifying and disturbing, I will be trying my damndest to put up enough new posts to move it off of my front page as quickly as possible.  Feel free to perceive that as a good or a bad thing.

Then, there's the music; The film will feature the music of Bon Jovi, Guns N' Roses, Def Leppard, Foreigner (I bet you were wondering about the "foreigner" connection, weren't you?),  Journey, Poison, Europe, and Twisted Sister.  Fine.  I realize these bands all had rabid followings in their day, but I'd hope that some of those fans would have seen the error of their ways in the intervening years. Hey, I loved The Archies, but then puberty set in.

The only thing that will redeem this movie for me is if we later discover that anyone who went to see it was transported to another dimension when they entered the theater and never heard from again.  I can live with herd-thinning that shows a profit. 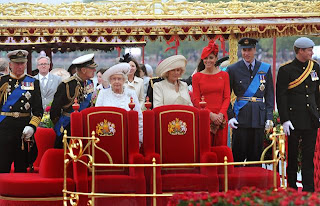 It's a bit of a paradox, but Americans are simply mesmerized by Royalty.  We fought a series of long and bloody wars to free ourselves from them, but we're strangely obsessed with them.  Granted, at the time, we were saddled with a King who spent part of his time issuing edicts that effected our daily lives and the rest of his time carrying on serious policy discussions with foliage.  Obviously, he had to go.   I suppose we've gotten the best of both worlds in the end; we get to watch pageantry and vicarious "living large" and somebody else pays for it.  It's fairly benign and nobody forces us pronounce our "zees" as those silly "zeds".

But secretly, we want to have a servants' wing and to need a golf cart to get from the Receiving Room to the Casual Dining Pavillion.  We want to be people who have no difficulty navigating the use of 27 items of cutlery at a single place setting.  We want to like sports where the spectators wear huge hats and volunteer to clean up horse shit between periods.  We want to "summer" with people named Mimsy and Kipton.

We want to have people cheering for us and paying us bucketloads of money for nothing more than having been born into the right family.

But do we really want people like that running the country.  I think not.  Ergo, I'm having major difficulties figuring out why Mitt Romney is polling so well?  That, and there's at least a touch of irony in the rabid anti-immigration crowd wanting to elect our first Mexican president. Or our first Unicorn president.

Which brings us to what actually got me going in the first place...

The people who live on the third floor next door are French.  They have a cat.  A Siamese cat. 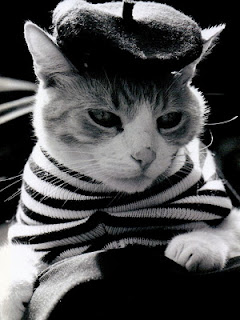 (The actual cat is a big fat Siamese cat and I'm way too lazy to stage a stakeout merely to get pictures of him, so you're getting random internet cats as illustrations.)

And the French fucking Siamese cat is an asshole. 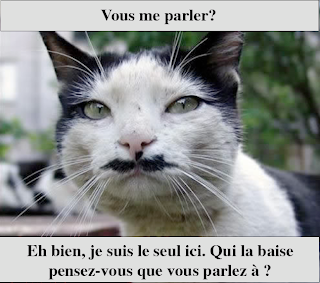 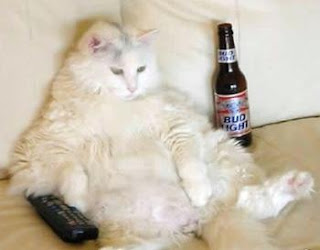 More specifically, the French fucking Siamese cat has decided that my backyard is its litter box.  And he keeps leaving me gifts of French Siamese shit.

I've tried yelling at him, but I don't speak French.  Or Siamese. (Which I suppose is actually Thai, these days. But I don't speak Thai either.  And I'm not a huge fan of Thai food either, so this is doubly, triply, quadrupally vexing.)

I saw somewhere that cats will leave their shits unburied as an aggressive display of territoriality, so I took one of LuLu's shits*** and plopped it on top of the area where the DoucheCat has been leaving deposits.  Moments later, DoucheCat came over the fence and pissed on the LuLu shit. 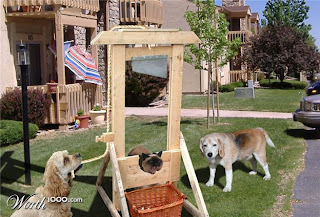 My wife is at a AP Test Grading thingamabob this week. Her roommate is from Canada, eh. But her name tag, which has her name and home town, lists Canada as "Foreign Lands". Given that they are currently in the middle of Missouri, I hope she takes the name tag off as the walk between the hotel and the convention center.

Ohhhh, too bad you weren't the winner of Janiece's trebuchet. I'm too lazy to look up the French word for "INCOMING!!!" or "Thanks, but no thanks!" but you could have had hours of fun with that.

John, why is it I suspect you know gospel versions of G&R's "greatest" hits?

Appetite For Destruction remains one of the greatest hard rock records of all time and Pyromania is a definite guilty pleasure. I will also confess a certain guilty fondness for Foreigner's 4. If you're of a certain age, it's kinda obligatory to crank "We're Not Gonna Take It" and "Don't Stop Believin'" if you're in the car and either comes on the radio.

The rest of it, you can sprinkle LuLu piss on. Or save up enough for whatever you consider a proper baptism in Bon Jovi's case--I'd be amused by a healthy sprinkle, but if you want to save up enough cat urine for a good ol' fashioned Southern evangelical dunking for Jon Bon Jovi, power to you and all my blessings, too.

(Oh--and while I have no desire to see Rock Of Ages, I'm afraid the answer to "Who is this movie for?" would be "white people 37-45," i.e. my demographic. Sorry about that. You're right, we should've been content with karaoke and playing Rock Band, but you know how Hollywood is. The minute they figured out we were old enough for nostalgia and had disposable incomes, Rock Of Ages was as inevitable as Forest Gump or The Big Chill were for Boomers.)