Are You The Keymaster? I Am Gozer! 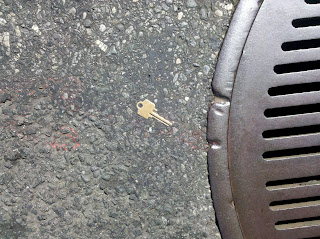 If you're walking up Myrtle Avenue and you look down as you're crossing Washington Avenue, you'll see this key embedded in the asphalt.  This key has been driving me batshit for years now.

Did it belong to one of the guys repaving the street?  Did a couple have a fight and one of them tore the key off of his (or her) keyring and threw it there to solidify their breakup?
Did it fall out of someone's pocket moments before the Steam Roller squashed it into the pavement, never to be retrieved? (And what the hell do you call a steam roller these days since I haven't seen any steam powered vehicles lately?)

What did this key open?  Someone's front door? A padlock on a gate? A Treasure Box?

Did the person who lost it ever discover its current whereabouts? Does he pass by frequently, thinking, "If only I could pry that key out of there I could open the treasure box Granny Esmerelda left me and then I'd be rich, rich, rich instead of delivering pizzas!"

Or maybe, if you could pry the key out, it would open something inside that manhole cover next to it.  Maybe it opens a portal to another dimension where...uh...STUFF HAPPENS!

The possibilities are really endless.

P.S. Guess where I was last night? 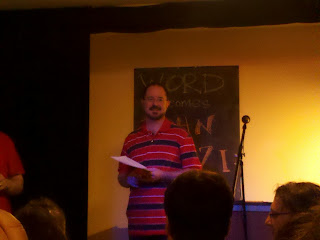 All I can say is that there were SEEKRETZ told and a bunch of SWEARING TO SILENZ and now I know stuff that you don't know and I'll NEVER TELL.  Except if that SWEARING TO SILENZ included a prohibition against admitting the very existence of SEEKRETZ, then I already blew it and I now have to lobotomize myself with a power tool or some other punishment of dire consequences.  If I start posting things with a complete absence of vowels, you'll know what happened.

Scalzi's looking right at you! He knew you were going to tell us that there were SEEKRETZ! You might as well put on your red shirt and tell us what they were now, before it's too late.

PS - you can't banninate me; this is a different picture.

PSS - my Picassa album is going to be filled with ugly pictures of Dee Snider. Thanks Nathan.

Gozer the Lobotomized. Has a nice ring to it, don't you think?