Maybe You Shouldn't Stand Too Close To Me.

I mentioned yesterday on FaceBook that I may be the cause of some natural disasters. I know there are some preachers who regularly blame fires and earthquakes and hurricanes on gays, or gays who want to get married, or straights who want to get gay-married, or soldiers who shoot too gaily...or some-such.  But I'm straight, so that isn't it.  They probably blame NY Jews for a bunch of stuff too, but most of them have that minimal level of political correctness that prevents them from saying so out loud. No, the truth is that I don't think anyone has ever pinned the blame on me personally, but I'm starting to have some suspicions.

The first thing that made me think of this is that I've got an ongoing battle with the school across the street from me. A few years ago, they installed security lighting. Obviously, I don't have a problem with the fact that the school wants to have security lighting.  We've got porch lights.  It's a good thing for a neighborhood to have some lighting at night.

Unfortunately, the people who chose the lighting for the school thought the threat might be coming from my apartment.  Or the roof of my building.  These lights are aimed out more than down.  They'd be great lights in the Goofy Parking Lot at Disney. 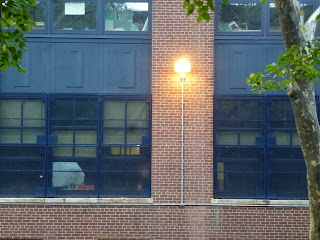 Look at this sucker in daylight and just imagine what it's like at night.


If I stand against the wall of the school directly under the lights, I'm in shadow.  On the other hand, I can read a book in my living room at night without wasting any of our own electricity. I feel like one of those soldiers in the New Mexico desert  during an A-Bomb test.  I'm concerned that one of these days, I'll get up to leave the room and my shadow will stay on the wall 'cause it got burned there.*

Needless to say, I've been bitching about these lights since they were installed a few years ago. I've complained to the school principal, to my City Councilwoman, to my Community Board, to 311, to the NYC Public Advocate, and to the NYC School Construction Authority.  I've been met with apathy, confusion, ignorance and/or ineffective sympathy.

Twice now, I've felt like I was on the verge of a breakthrough. And here's where we get to the first point of this post.  The first time I thought I was getting somewhere, was with the Public Advocate's office.  Unfortunately, two days after I'd contacted them, NYC had a crippling blizzard.  They actually left me a message a few days later asking me to please be patient; I wasn't being ignored, but they had bigger fish to fry at the moment.  I thought that was completely understandable.

A few calls and emails ensued a month or so later and I was eventually relegated to someone who had no idea how to pursue the issue and figured it would be easier to just forget about it.

About two weeks ago, I filed my third complaint with 311 (the City's non-emergency assistance line). This time, I made sure to go on the record with all my contact info and get a Service Request number so (by city ordinance), they'd have to respond to me.  After a week, no response.  I called again.  The person I spoke to was at a loss and suggested I go online and write directly to the Mayor's Office so that hopefully, someone there could figure out how to address the problem.  I did so.

That was on Saturday.

You may think the connection is a bit tenuous, but last night, I realized I've got one more little coincidental connection that points to me being dangerous to hang around with.

Back in August, I was working on a TV show that came to get a few days of NY exterior scenes.  Most of the work involved dialog scenes with a few of the actors in various iconic settings, but some shots were just quick pops of the actors walking down some street or coming out of a subway...whatever.  For those shots, we didn't want to drag all of our trucks all over town (it takes a lot of time to move big trucks and campers around the city), so we just threw everybody and the camera into a couple of vans.  We'd hop out at some corner, get a couple of takes of the actor in that setting and then move on to the next one.

At one location, the actress' hair had wilted a bit in the heat, so one of the Vanities (what we call the Make-up/Hair people) asked me if there was somewhere nearby she could plug in a curling iron to do a touch-up. So I walked into the Muscle Maker Grill and asked if they'd mind us plugging into an outlet for a few minutes.  They were really nice and said, "Sure". Just to be nice, I bought a grilled chicken sandwich even though I wasn't really hungry. It was really tasty. 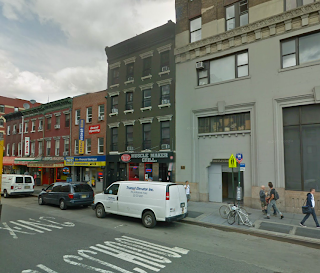 That's them in the first floor of the dark green building.

Here's what that building looks like after Hurricane Sandy's visit. 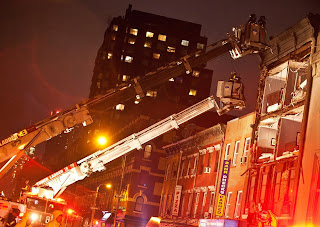 I won't be offended if you move away from me a few steps.  Really.  It's O.K.

David had a similar light problem in 27b/6, you might try what he did: Justin's Floodlight.

If you ever plan to come to Canada please let me know at least six months in advance so I can dig a fallout shelter.

I'm not sure fallout shelters will make any difference. It might just cave in on you.

Damn it, so you're what's holding me back from winning the lottery. Whelp, only one thing to do now.

Unless you couldn't buy tickets because you were held up by a freak landslide, it wasn't my fault. My evil powers lean in other directions.

You… you were responsible for the landslide as well? Surely you must stop using your powers for evil, Nathan.

Get a good, bolt action .22 that takes long rifle shells.

Learn how to use it.

Nobody in Brooklyn will react to a single .22 shot, hell back in 72 the police ignored a single 12 gauge shot in Park Slope.

It will take the school custodian at least six months to replace it, something in their contract.

My suggestion is along the same lines as Warner's except use one of those fabulous natural disasters you can conjure up as a cover.