Goy To The Woyld

So it's that time of year when we all find ourselves deep in the trenches of the War on Christmas and I just thought I'd take a moment to point out a few of the war's unacknowledged heroes.  The covert agents serving deep behind enemy lines.  The ones living each day in danger of exposure and punishment.  But they soldiered on and since many of them have passed on, I think it's high time to give them the recognition they so deserve. 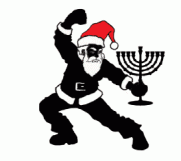 Of course, I'm talking about Jewish songwriters.  As I'm sure you're aware, many of the perennially favorite Christmas songs were written by Jews.  Irving Berlin, Jerry Herman, Johnny Marks ... the list goes on and on.  And the explanation has always been that they were just writing songs for a large demographic and that the songs, if successful, would have a really long shelf-life and continue paying royalties for years to come.  And while there's certainly some truth to that, I can now point out that those reasons were just providing cover.

I haven't been made privy to all of their (Ha, I fixed it.) heroic actions in the War on Christmas, but I can now let you in on a little secret; All of those Christmas songs contain subliminal subversive messages.  Let's start with the Godfather of covert caroling, the 19th Century French composer Adolphe Adam who wrote "O Holy Night".  His rebellion was somewhat arcane and difficult to decipher, but courageous nonetheless.  If you follow a complex code, utilizing every third note from every other line of the score (and leaving out the bassoon's part), there's a message that says, "Watch out fellow Jews. Serving in the French military will get your ass tossed in jail." If Alfred Dreyfus hadn't been such a music snob, he might have avoided a great deal of unpleasantness.

The Christmas Waltz is a bit more bizarre but no less seditious in its intent.  The song includes an hidden recipe for potato knishes and knaidlach.

Obviously, discovering these folks' heroism has been difficult; they were double agents serving under the most trying of conditions and their secrets have been well kept.  If you're aware of any of them I've missed, please let me know.  I, for one, think it's time their heroism was celebrated.

As for other examples, I think it's a well-known fact that Irving Berlin's "White Christmas" is in fact a very-thinly veiled reference to the Bolshevik revolution in Russia. The "white" referenced is not snow, as is usually assumed, but rather a reference to the White Army, the pro-monarchist forces that fought the Red Army for control of the country during the Russian Civil War; the song is clearly from the point of view of one of these Red Army soldiers, i.e. a communist (and, naturally, an atheist, it should go without saying)>

The song is usually performed without the critical, giveaway verse:

I'm dreaming of a White Christmas,
With my rifle in my arms
With which I'll shoot a bootlicking Romanov dog
And stab him in the eye

It used to be that every time "White Christmas" was performed, a portion of the royalties were donated to the Fourth International, but I don't know where the contributions go these days.

I know I set you up for this, but you're really too good at it. I'd be willing to give you odds that sooner or later, your comment will be quoted as evidence of an actual conspiracy.

I'll be Googling "White Christmas, Bolsheviks" regularly for the foreseeable future to see when it pops up.

I would also point out that the popular medium of delivering this music was radio, later television (comments on the LP and 45 later)

The other medium of delivery included the LP, invented by Paley's CBS and the 45, invented by Sarnof's RCA which owned NBC.

Sorry Warner, they don't count. Sarnof, Paley and Goldensen were actually the Marshall Petains and Vidkun Quislings in those early years of the War. There was no covert action taking place on their part.

(P.S. I'm totally making up this shit as I go along so arguments about who is and is not being disparaged will be met with derision and flung boogers.)

ABC at the time invented nothing, but its engineers did have the idea of putting a company phone line in each of the local bars, to make it easier to find Roger Grimsby (I'm not making that up).

Someone of my acquaintance who works at Home Depot claims that all the Muzak versions of these songs that play on continuous loop on the store PA are making the brains bleed out of his ears. That's part of the plot, right? Bad Muzak versions causing the poor seasonal workers subjected to it to slowly (or maybe more rapidly) go insane?

Speaking of the War on Christmas, I was reminded of the Carol of the Old Ones so I thought I'd have a listen. Imagine my delight in finding there are a whole flock of carols in a similar vein, including Do You Fear What I Fear and It's The Most Horrible Time Of The Year.

These seem to suit my mood this year.

The following phrase makes no sense:

“I haven't been made privy to all of they're heroic actions in the War on Christmas …”.

You're absolutely right. It doesn't. Thank you for your diligence in finding the only typo on the internet.

Now the entire internet is unusable because Nathan can't be bothered to use a grammer checker. Way to go Nathan.

Back to print newspapers and teletypes I guess.

Nathan, you were wrong/sloppy. Accept it.

And this has been bugging you for more than 5 months?