Film Is A Visual Medium. Your Work Will Be Obscured To The Fullest Extent Of Available Technology. Thank You For Playing. (Part Two, Take Two).

I left you a few days week or so ago, half-way through talking about how each member of the crew on a movie has the heartfelt conviction that their part in making a movie is the mostest importantest, critical, necessary and worthy part in the process.  I alluded to the sad fact that most of those people are wrong; how could their contribution be the most important when obviously, my contribution is the one that really matters? (he said self-mockingly).

Let's pick up (again) where we left off; a bit more about instances where the location was clearly the star of the scene but the Director, the D.P., and the Editor didn't get the memo.

There's this really great Dim Sum place in Chinatown Called Nom Wah Tea Parlor.  It's on Doyers Street and it's been there, more or less, forever...or at least, since 1920. It sits at the spot where Doyers Street makes a sharp dogleg turn which was once known as The Bloody Angle. (The blind angle offered a wonderful spot for various gangs' "hatchet men" to catch each other unawares.  It's said that more people have died violently at this spot than at any other street intersection in America.)  Here's a shot looking toward the present day site of Nom Wah from the early 20th Century and another similar shot from a few weeks ago. 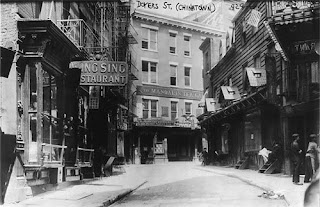 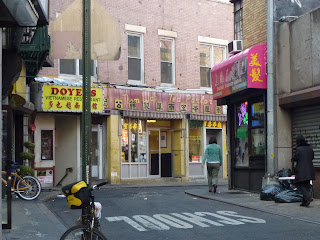 The first time I ran across Nom Wah was on my very first job as a Location Manager.  It wasn't going to be featured in the video, but, like every other place on the block, I needed to make arrangements to keep their lights on throughout the shoot.  This gave me the opportunity to meet Wally Tang, who owned the place from 1974 until a couple of years ago.  Here's a shot of Wally from, I think, the early 80's. 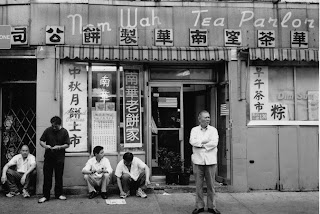 Two things came about from this shoot.  1. I met Wally and discovered that he spoke no English at all the first time I met him, then became progressively more fluent as the week went on and I stopped in a few more times, and 2. Nom Wah is one of those locations you get a look at and then decide you're going to get it into a movie if it kills you.

When I worked on True Believer not much later, (see Part One of this bit), Nom Wah wasn't really going to show up any better than it had the first time I saw it. Once again, I just needed Wally to keep his lights on throughout the night.  Once again, Wally spoke no English at all on my first visit and became perfectly fluent within a week. He also invited me to have dinner with him and his extended family while the shoot went on in the cold and dark.  It was very enjoyable.

Fast forward a bunch of years to when we shot A Good Night To Die.* This is a movie that either should be better than it is or is better than it has a right to be; I've never seen the whole thing, so I can't judge.  It did have a cool premise; a bunch of freelance hitpersons all hired to off each other including Deborah Harry as a big boss and Ally Sheedy and Ralph Macchio as a seriously whacked-out brother/sister hit team.**

Anyway, the lead-up to the finale of the movie was supposed to take place in a restaurant.  The type of restaurant wasn't specified, but I thought of Nom Wah right away.  Here's some more shots (interior and exterior) to give you a better idea what the place has to offer visually. 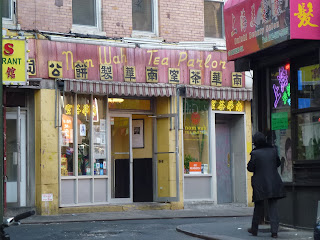 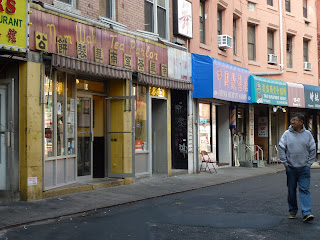 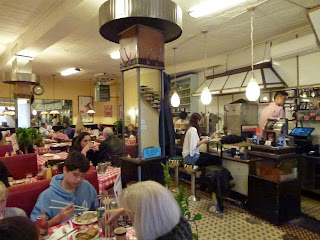 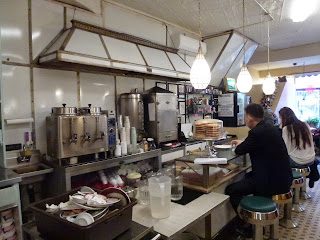 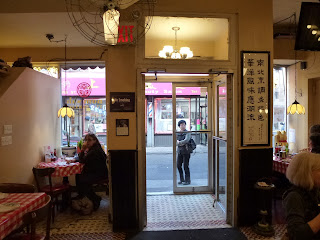 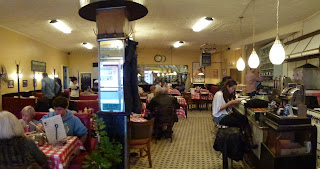 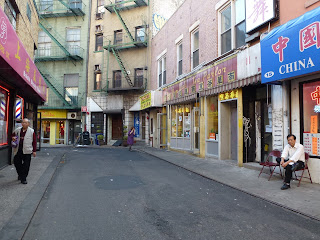 One thing you'll note is that viewed from certain angles, the restaurant offers some really interesting backgrounds and viewed from certain other angles...not so much.  The powers that be chose...not so much.  I mean, sure, I accept that the scene is about the people, but you can get a tight shot of people and still line it up so you're seeing the cool counter in the background instead of the friggin heater hanging from the ceiling.  Am I right?  Here's the scene.

Sorry, but I felt dissed!

That scene cuts short of it,  but after Michael Rappaport leaves the restaurant (SPOILER ALERT), he gets shot enough times to make Bonnie & Clyde and Sonny Corleone look positively un-perforated.  I could only track down some screenshots from the interior looking out; not any viewed from the exterior if any of those angles made the final cut.  I guess I get a little bit of artistic vindication from that part.*** 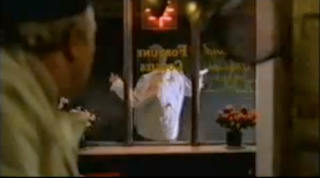 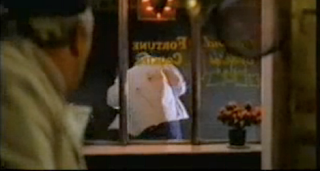 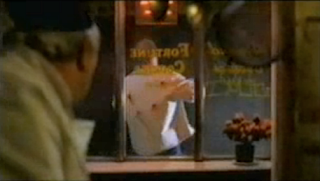 Incidentally, I had lunch there a few weeks ago on the day I shot the more recent of these pictures.  The restaurant had been closed for a while, but was re-opened about a year ago by Wilson, Wally's nephew, and he's updated the kitchen but left the dining room and exterior alone.   Of course, I approve.  (Wilson is behind the counter in the first interior shot above.)  As to the food?  I have to admit that I'm not a huge fan of dim sum, so my opinion doesn't count for much.  If it's any indication, the place was packed by the time I left.
----------------------------------------
*The film has a release date of 2003 but it was shot a few years earlier and experienced all sorts of difficulties getting distribution.  That's another story entirely and I only know the dirty details third, fourth and fifth hand, so I won't go into it.

**  Here's a clip of them with Lainie Kazan. It's important to note that throughout this scene, I was lying on the floor in the back seat so I could relay info from the director and give them directions on where to go.  I spent about 4 hours trying not to laugh during takes.

***It's also not necessary to point out that the bullets slamming through Rappaport's body seem to dematerialize just short of hitting the front window.  We didn't have the time or budget to replace the front windows for five takes of that scene.
Posted by Nathan at 10:29 AM

OK, it's in Chinatown, but I think I see one non-gweilo in the place. Was the place packed with white people when you left?

Let's drop by there next time I'm in town and I'll give you my semi-professional opinion. As long as you stay out of Chinatown professionally for a while longer. :p

As I recall, it was a pretty good mix but authenticity in Chinatown isn't quite as easy to judge just by the mix of faces. The neighborhoods in that area overlap so much, you'll get a lot of white faces in any restaurant that doesn't seem intimidating. Especially for lunch with all of the nearby courts and government offices.

OTOH, I know Wilson has been going out of his way to make the place more of a "destination". You actually order off of a menu now instead of from a steam cart rolled around the place.

And I'll be staying out of Chinatown "professionally" until I get a script that ought to be shot there.

I dunno, I am in Chinatown all the time and the mix of Chinese / Caucasian is almost always in the favor fo the Chinese where I eat - even in the places that don't serve your favorite tofu dish. :D

But I don't generally get down to that part of Chinatown much, staying more in the Allen / Grand vicinity.

Oh yes, Nam Wah is Cantonese for "South China", so I'm expecting Cantonese style dishes. As is befitting a restaurant that dates from the Exclusion Act when Cantonese were the only Chinese in Chinatown.