Film Is A Visual Medium. Your Work Will Be Obscured To The Fullest Extent Of Available Technology. Thank You For Playing. (Part One)

When I was in college, if you were majoring in Film, you had to produce a "Final"  film and the crew was made up of fellow students. I remember working on one film where Student "X" was working as the Gaffer...and he was really fast. The problem was that he'd light the scene as soon as he knew where the actors would be acting, but not before he found out where the camera would be. So he always set up the lights in the shot. The third or fourth time this happened, he screamed at the Director of Photography, "The lighting is beautiful! How about if you 'adjust' your shot to avoid the lights for once ‽"

You may find this ludicrous -- and at the time, so did I -- but I'm beginning to sympathize with the poor deluded schmuck. It's true; everyone who works on movies has, at one time or another, felt like their contribution wasn't getting the respect it deserved. (They've also all felt they deserved a really cool leather crew jacket or even a shiny new BMW instead of some crappy T-shirt as a wrap gift, but that's another story altogether.)

It's a good news/bad news situation.

So yeah...I get it. the movie is about the people and what they do and say in the locations you pay me to find, but would it be asking too much to actually let the audience get a look at the places sometimes?  Huh?

You want an example?  On one movie, I was sitting down for a meeting with the Director and the D.P. to discuss the look of the film before I got heavily into scouting.  The D.P. said he intended to shoot most of the movie "kinda long-lensey, in your face, really intimate".  "Great", I said, "We can shoot the whole movie in your office." (I swear this is an accurate transcript.)

Here's the opening scene of the movie and here's just a screenshot since embedding is disabled. 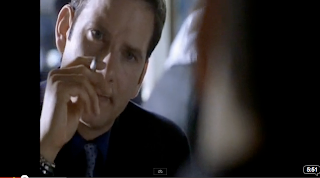 Go ahead and watch the whole thing; it's a pretty terrific scene.  But it's also a pretty terrific location. We looked at 42 BAZILLION restaurants before choosing that one. I'm not sure why we bothered.*  Look, I know the scene is about the people around that table, but couldn't we get one stinking in-focus shot of the place? (Why yes...I am being a whiney little bitch.)

One of the first movies I had any real Locations responsibilities on was True Believer.  The opening sequence of the movie is a murder in Chinatown that sets up the rest of the plot.  Here's the trailer for the movie and you can see a snippet of the Chinatown sequence in the first few seconds.

The scene takes up a couple of minutes of actual screen time and it took two full nights to shoot. It took me two solid weeks to make all of the arrangements necessary to shoot there ... stores/restaurants keeping their lights and signs on all night, access to a bunch of roofs and fire escapes for lighting and camera positions, etc.**

Once again...it's a terrific scene, but Chinatown is really fuzzy and out of focus for most of it. Does a little part of me resent the fact that two weeks of my hard work is barely visible on the screen?  Nooooooo!  That would be petty and stupidly self-centered of me. (Feh.) 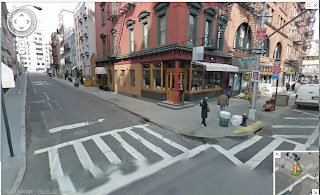 And just a bit of trivia...O'Neal's is across the street from the Old Police Headquarters Building.  If you go into the basement of O'Neal's, you can still see a small remnant of a tunnel that used to connect it directly to the Police Building so cops could get there clandestinely during Prohibition. 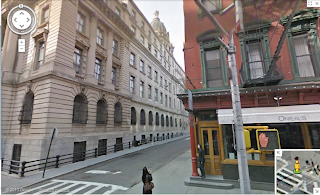 **The director wanted the street to "suggest" that there was some sort of street festival going on and he wanted a bunch of banners strung across the street to add color and texture, so I had to get permission to string those between buildings.  Nobody really cared what the banners would say, since most of the audience wouldn't be able to read Chinese, so the Art Department hired some Chinese sign-writer to make them and told him to just make them say innocuous stuff -- "Venerable Honored Ladies' Club Flower Sale" -- stuff like that.  The sign writer decided it would be really funny to sell the movie a bunch of banners filled with rabid Communist slogans -- which we discovered when the Art Department started hanging them up and the street was suddenly filled with people screaming at us and threatening all sorts of dire consequences if we didn't pull them down immediately.
Posted by Nathan at 10:42 AM

That story about the banner is fucking hilarious. I bet you guys were somewhere near the Nationalist Party building in Chinatown, too.

Someone in the Art Department should have been fired for not cross-checking the banners, though. What if the painter had written propaganda for NAMBLA or something worse?

The important part is the peanut butter & cheese crackers.

Frankly, it never occurred to anyone that some guy who was being paid handsomely to create some banners would fuck with us that way...OMG, the Art Department trusted a vendor! That plus the fact that an Art Department -- like most departments on a movie -- had about 12 billion other details to concern themselves about. For that day and for all of the days coming up.

Producers who would even think about firing people for that one would have had a mutiny on their hands - and they'd have deserved it.

P.S. I didn't mention that because I wanted to talk about blaming anyone. I mentioned it because I still think its funny as hell all these years later. (It kinda sucked in the moment.)

If an art director for an ad agency had let that slip into the background of a shot for a commercial, they would have been out of a job post-haste. It is funny but it's also snobbish - if the signs had been in English, or even French, they sure as shootin' would have cared, no? But since it was just Chinese no one gave a shit. Maybe the sign painter got a little miffed about their condescending attitude. Not saying the Art Dept. was necessarily racist, but that was the first thing I thought of, because most Chinese calligraphers I know are pretty serious artists, or like to think they are, but if someone made an off-hand comment that it would matter only to Yellow people, I can see some of my wife's friends pulling this stunt.

I'll answer you in reverse order.

1. I (obviously) haven't got the first idea what transpired when the banners were ordered, so I can't comment. I'm also not willing to assume somebody made a comment that provoked the sign writer without any evidence to support that conclusion. I only know what I was told by the Location Manager (who had been informed by the Art Director)-- namely that they had ordered utterly innocuous banners.

I'm ready to drop that discussion -- just 'cause I don't feel like discussing it any further in relation to a post that was meant to be nothing but a tongue-in-cheek jab at myself.

2. Commercials are an entirely different kettle of fish with regard to an item like banners for set dressing. In an ad, there shouldn't be ANY written visual that doesn't specifically contribute to selling the product. The Agency and Client would have already spent hours arguing about the exact wording and associated artwork. And a commercial may involve hundreds of specific details, but it has a crew devoted to NOTHING BUT those hundreds of specific details for ONE 30-SECOND SPOT. A feature (at least volume-wise) consists of 180 or so 30-second spots that are shot back to back with no time between. They're not, in any way, comparable situations.

And I'm done with this part of the story.

1) I've often wondered about those peanut butter cheese crackers myself. I'm not a fan of them and I have no idea how anyone could even come up with that combination and think, "Yum!" but in their defense, they don't really taste much like cheese... or peanut butter. So maybe that's the secret to their success?

2) That banner story reminded me of this.

A friend who reads the appropriate dialect swears the main logo on a long out of business but very good Szechwan restaurant near ABC read 'F-ck you, round eyes'.