Just A Tad of Sutton Place.

Manhattan's east side has a bunch of bulges in it, so First Avenue isn't always the furthest one to the East.  Downtown, there's Avenues A, B, C, and D.  Way uptown, around 116th Street, there's Pleasant Avenue between 1st Ave and the East River.

At 57th Street, there's one street east of First Avenue...called Sutton Place. (It becomes York Avenue as you head north and runs up into the low 90's.)

Anyway, Sutton Place was established as a wealthy enclave starting around 1920.  If you look it up, you'll find a list of famous people who have lived there.  At the end of 57th Street, there's a little park called Sutton Place Park.  It's actually cantilevered out over the FDR Drive.

Here's a couple of little items there.

First, before you enter the park, there's a townhouse that is (or was?) owned by the Heinz Estate. (Yeah, the pickle people.)  One of my first jobs in NY involved a shot on the street in front of the house and the director wanted it to appear as if the lead actor was coming out of the house.  For days, I kept getting stonewalled by a fairly officious housekeeper who kept taking messages, but I'd get no response.  Finally, I asked another doorman nearby if he knew any way I could contact someone.  He told me that the owner walked her two little yappy dogs every afternoon at the same time.

So I waited for the alloted time (OK, I stalked the owner) and got permission for our actor to stand outside the door for the shot.  The lady I spoke to was roughly 135 years old at the time (1986), so I'd imagine she's really cantankerous now.  Here's the house.  Same blue door as 25 years ago. 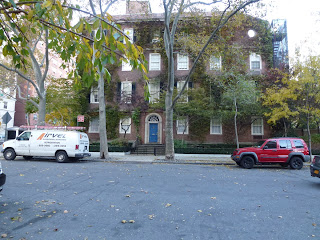 The UN Secretary General's Official Residence is next door around the corner.  The cop in the booth out front gets really pissy when you take pictures of it, so use your imagination.

The park itself is below grade just outside of the frame if you looked to your right.  It's a lovely little park with a great view of the Queensborough Bridge just a few blocks north.  (No, I'm never going to start calling it the Ed Koch Bridge, official declarations be damned.)  Anyway, the centerpiece of the park is a bronze statue of a wild boar.  I don't think there's any special significance to the boar, just that the guy who donated it, liked it. 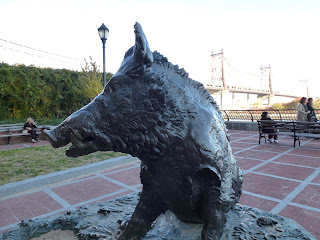 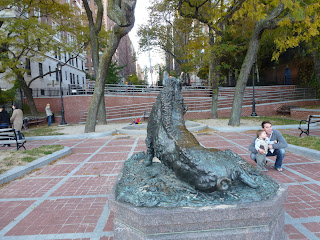 I'm not sure whether or not the pedestal is a replica of the original, but it's covered with little mice, toads, crabs, snakes and other crawlies. I have no idea what their significance is, and I highly doubt they hang out together like that in nature. 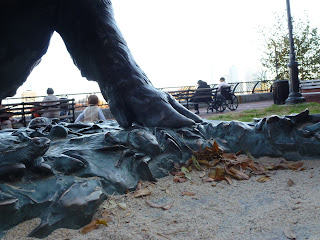 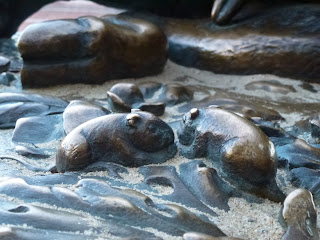 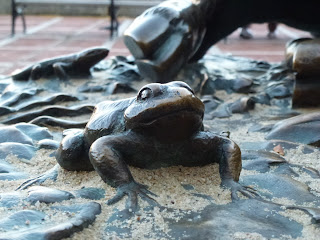 Here's another thing.  While trying to find out about this statue, I found a link discussing a life-sized sculpture of an elephant that was donated to the UN for their sculpture garden a few years ago. Apparently it's got a prominent two foot long penis!  According to what I could find online, the UN cheerfully accepted the elephant and then promptly landscaped it so that it looks like the elephant is charging from a thicket of bushes -- hiding it's nether regions.  I think the sculpture garden is closed for renovations, but I promise to document this wonder for you at the soonest opportunity.
Posted by Nathan at 5:14 PM

I don't know that it is the case, but it might be that the boar statue was put in in remembrance of the boar that attacked King Henry the Eighth in Sutton Coldfield in the early 16th century.

Henry VIII was saved by a beautiful female archer. For some reason he didn't marry her.

I don't think the stars really line up.

What is really disturbing is that I knew there was a Tudor king who had something to do with a boar and Sutton was somehow involved.

Of all the important things I'd like to remember but can't, why would my limited capacity brain retain that useless bit of information?

I was just thinking that since the original sculpture is by some Italian guy, the connection to a Tudor king was probably pretty tenuous.

Not to beat this to death, but I was thinking while that sculpture probably wasn't thinking of Henry VIII when he made the thing, the guy who put it there may have made the same connection I did.

Have a good Remembrance Day. Wear a poppy.