I'll get back to telling you about how the Powers-That-Be are conspiring to conceal my contribution to the art of cinema -- there's not even an Oscar for Bestest Locations -- but first, I wanted to show you some really cool pictures I ran across recently on a friend's FaceBook page.

I met Iris Ng a few years ago when she was the Rigging Gaffer* on a show I was working on. These shots are from another movie she was working on and there was no way to get the camera crane up to a 12th floor roof except to haul it up with a construction crane. One of these shots is the crane on its way up and the other is on its way down. (I'll also give props to the Location Manager, since using the construction crane called for shutting down traffic on 36th Street twice for a few hours each time.  Suck it, crosstown traffic!) 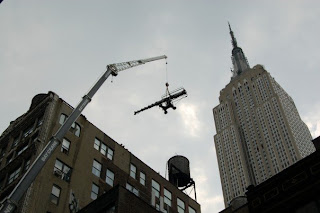 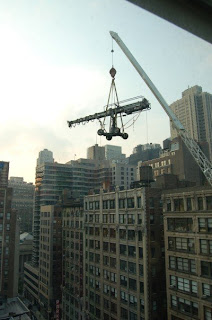 Also, as long as I'm snarfing content from Iris' photo album, here are a couple of shots that actually involve her department.  This is what happens when you set 44 electricians loose on 13 rooftops! 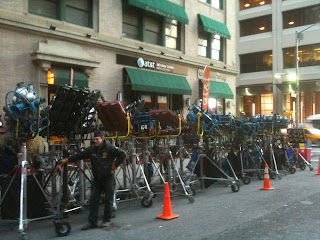 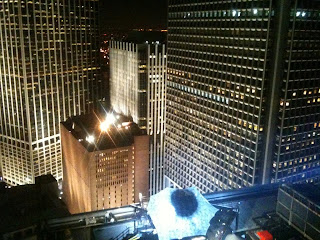 For years, among other things, I had the technical warehouse for ABC. The bean counters did not like that I always had at lest 50k feet each of the two coax cables most used in television and double that in audio.

Why couldn't I do better inventory, I had the wiring crews as well and their work was planned in advance;

The answer of course was one of two,

yes the wiring crews are planned in advance, until you get a morning with 13 distinct super priority drop everything else and...

Can we watch the final video of this pics?

If you don't post #3 pretty soon we'll all be asking for our money back. You have an obligation to your public. And don't say that you're working and don't have time to write, you need to get your priorities straight. Art before food & rent.

First of all, it'll be #2, since that was "pre-empted". Second of all, I've got something else germinating at the moment, so it may take a back seat. Third of all, I'm fickle and flighty when it comes to what shows up here.

If I don't get around to it, your money will be cheerfully refunded. (Yes...I spent it already on a Lexus for Anon GF's Christmas present, but I'll refund it because I'm just that kinda guy.)