I don't have anything in particular I want to talk about today.  They're having the GOP Primary in Iowa today (I think?) and I'm pretty sure whoever wins scares me about as much as the other possibilities, so it's a wash regardless.

There was a story on the news a few nights ago about a "promising new treatment for acid reflux", so I decided to pay attention to that.  Most of the story was about how much having acid reflux sucks, (yeah, big news there), and concluded with about 5 seconds describing some kind of surgery where you get an artificial lining installed in your esophagus.  Oh, goody.  Surgery that isn't available that I wouldn't have anyway.

Last night's "Everybody Panic" story was about how some unidentified group (at least unidentified by the anchorman), in some Scandinavian country found a higher incidence of prostate cancer among men who drank milk regularly as children!  Holy Crap!  I drank milk as a child.  The story concluded, (of course), with a disclaimer that the test group was really small and from a tiny geographic area and that the results were all anecdotal and the research was far from establishing any cause and effect, so you should basically ignore the whole thing.

Here's an entire story about some guy who realized that constantly interacting with his iPhone may get in the way of him experiencing his real life.  Thank Gawd the NY Times was there to reveal this hidden truth. PIX OR IT DIDN'T HAPPEN!

Since none of this is particularly inspiring, let's begin the New Year with CATS! 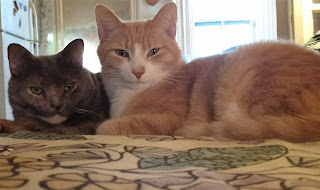 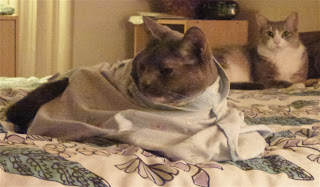 And Widget is more comfortable crawling into a nightshirt. We're trying to teach her not to turn it inside out, but we're not holding out any hope for her properly identifying which hole her neck goes through.  LuLu's just embarrassed by he whole thing.
Posted by Nathan at 2:27 PM

Widget leaves her head out? When Kit crawls into/under things, sometimes her head and shoulders are the only parts she manages to hide.

Isn't there some rule soemwhere about the number of cats in a place (your apartment) not exceeding the number of people who occupy said space? You know, like 3 to 2 for you?