Anon Niece has another kid on the way, so Anon GF has been knitting lots of teeny, tiny things to clothe the child and inspire oooohs and ahhhhhs and awwwwwwwws. (At least for the month or so stuff fits kids at that age.)

Anyway, while looking through patterns Anon GF announced, "Hey, here's one with a Star Trek insignia on it.  I should make that".  Which I said would be a brilliant idea, but she shouldn't make it red.  Then I had to explain why.

Apparently, these things aren't learned by osmosis and I've clearly been falling down on the job.  I'm so ashamed.  (It's not like I expect random Plan 9 From Outer Space references!) 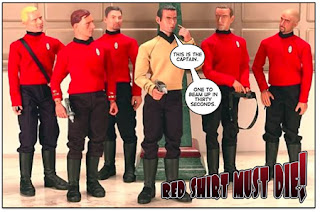 Nathan, all I can say is that you should have seen this coming because you really ought to be interested in the future, as it is where you and I are going to spend the rest of our lives.

Blue. You want them to grow up to be doctors or scientists.

Anon GF says, "Thanks". (She ordered the grey Cadet version.)

WTF are you talking about.

I'm sorry, I thought you were soliciting Plan 9 references.

We'll stick to the cadet version until the kid needs the 18 month size.

"Blue. You want them to grow up to be doctors or scientists."