a couPle oF thIngs that hAVe NoTHing tO DO wiTH EACh otHer. sO, of cOURse, i'LL mAsh tHEm toGEther IN oNE posT withOUt aNy aTTemPt at coNNEcting THEM*.

The first thing that has nothing to do with nothing else:

Recently, I've finished a couple of different books that kinda, sorta go together because technology features prominently in each of them.  First, there's Turn of the Century, by Kurt Anderson.  I'm not sure if it says more about my age or about me personally, but I had to take a quick look before buying it to make sure I knew which century it'd be about.  After all, for most of my adult life, the phrase "turn of the century" referred to the end of the 19th century. 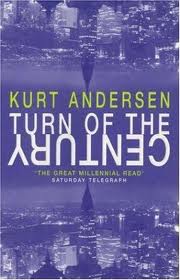 This one takes place as the 20th Century is coming to a close and the background of most of it is the wide range of new technologies available and how they feature in new media and in people's daily lives.  I'll admit that the book took a while to hook me in, but eventually, I really enjoyed it.  One of the more captivating aspects was me trying to remember which technologies were actually new in 1999 when the book was published and which the author was taking liberties with.  The fact that some of them seem so antiquated already (dial up anybody?) provided another nice wrinkle.

Technology aside, there's a somewhat Kafkaesque story in there -- one in which basically innocent actions come back to haunt the protagonists later in the story.

The other book I just finished is REAMDE, by Neal Stephenson. 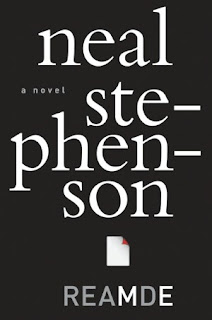 I'm a big fan of Stephenson's and, overall, I recommend this.  I'll cut to the chase right away and say that even though I think this may be Stephenson's weakest book, it's still so head and shoulders above most other books I read that it still rates as terrific. (Note: I really like long books so, at 1044 pages, this one was right in my wheelhouse, but it could still stand to lose about 300 pages in the middle without suffering.  Sorry...just my opinion. I have a feeling Stephenson may be a victim of his own success and reputation, making editors hesitant to force that type of issue.)

Anyway, this one centers on a Massively Multiplayer Online Roleplaying Game called T'Rain and the people who created it.  Part of the company's plan involves the realization that some players will naturally find ways to monetize the game and profit from it -- so they embrace that model and build that into the design.  Unfortunately, one group of hackers creates a virus called REAMDE to make the profit-making quicker and more...profitable.

Unwittingly, this sets off a series of kidnappings, murders, terrorist episodes and epic battles...both in the real world and within the world of T'Rain. The protagonists will include IT geeks, hackers, MI6, FBI, local cops, sex tourists, survivalists and a cast of hired thugs.

" [the] decryption key [was] pulled out of a dead man's wallet by a Hungarian in the Philippines communicating with an American in Canada, the conversation taking place on an imaginary planet."

See? Not confusing at all. But it's really well worth it. Really.

Something that has nothing to do with nothing:

Today is the 30th anniversary of the Air Florida Flight 90's crash into the Potomac River shortly after takeoff.  Watch the linked video and read some of the other coverage.  In addition to being highly newsworthy, this crash is sort of a seminal moment in the history of news coverage.  Because of where and when it took place, much of the event was carried live to most of the country and I honestly can't remember a prior event that was covered with this sense of immediacy and access.

Ten days from now, it will be the 30th anniversary of World Airways' Flight 30's crash.  This was a flight from Newark, NJ to Boston's Logan Airport during a snow storm and the plane slid off the runway when it landed and ended up partially in Boston Harbor. The front portion of the plane broke off including the front row of passenger seats.  The only two deaths in this crash were passengers in the front row whose bodies were never recovered. (I'm not ascribing any weird conspiracy theories, but I'm amazed that the bodies - strapped into their seats -- were never found.  Maybe they were eventually and I'm just not aware of it.  Please correct me if my info is wrong.)

Anyway, the reason this one sticks in my mind is that I was a student at Emerson College at the time and it turns out I knew two people on the flight.  One of them was a college friend and I honestly have no memory of knowing she was on the flight at the time it happened.  I know we discussed it a few years later, but I'm amazed that I didn't know about this when she was part of my immediate circle of friends.  I'm at a loss to explain that. (BTW, this person is a current FB friend but I don't think she's ever visited the blog.  If she does happen to read this and feel like commenting, I'd welcome her memories.)

The second person I knew, I didn't actually meet until 4 years later.  It turns out that he was in the second row of seats and basically watched the rest of the plane continue further into the harbor without him.  If you read any of the reports about the crash, one of the themes is that Logan Airport's response to the crash had some real problems.  My friend recounted how he had waded ashore from the wreckage and somehow ended up wearing a jacket that had fallen on him from the overhead bin.  Once on the shore, he wandered around the tarmac for a while before he was picked up by an open stake-bed truck that ended up ferrying passengers to the airport fire station (which was an unheated garage space).  One of the things that stuck with him was that when he climbed onto the truck, he ended up sitting next to one of the pilots -- who promptly said, "That's my jacket. Give it back."

As is customary here, I have no unifying point to this story...just an odd memory I felt like writing down.

REAMDE should have been two books: a video-game-based SF story, and a terrorist thriller. A number of plotlines from the first half got dropped in favor of running through the mountains with lots of guns. Which is entertaining in and of itself, of course, but I read Stephenson for the SFness, and it steadily trailed away over the (many) pages.

I don't know about that. Stephenson often mixes seemingly unrelated stories and goes back and forth between them. That doesn't bother me, and in this case, I always found myself enjoyably surprised when he'd leap back into the other story.

Personally, I thought most of the excess word count was toward the end of Part I of the book. Things moved along much better in Part II (although the "game" storyline did mostly disappear).

I don't mind mixing two stories. It's that he dropped all spec fic elements, including a bunch of plotlines, and ended up with a straight thriller. I was hoping he'd wind it all up by resolving all the plotlines with an SF payoff.

That is Fabulous. We are Most Pleased.

I've not heard of Stephenson before, can somebody make a recommendation for an initial book or two, must be on the Nook.

My first Stephenson was Cryptonomicon, and then I went back and read some of the others. The Baroque Cycle, a trilogy, is also excellent.

Warning: These are really dense reads in parts. I recall reading pages and pages and wondering where they were going until he suddenly revealed something that made the whole section pay off. The payoffs are totally worth the effort to get there.

I also recommend Snow Crash, but it would be impossible to categorize any particular book as typical Stephenson. Each book (series) is unique and it can be surprising that they were written by the same author.

Cookbooks and books related to culinary

The book referenced looked interesting as I spend far too much time playing on line games of that type.

Snowcrash is available as Nook, so I'll try it.

My wife and I are taking a very long trip and I have no desire for half our luggage to be reading material, so I've got both a Nook (mostly mine) and a Kindle (mostly hers)

That's fine Warner. Like I said, Snow Crash is really good, but don't take it as necessarily representative.

Bought the book, however I first have 'All About Roasting' and a bio of Mike Royko to work through.

It does look to be interesting.