Allow me to apologize right up front for that headline. I know it probably puts that woman's voice in your head and nobody needs that.  And, truthfully, it barely works as a headline for this post, but after an extensive search (I looked for almost five minutes), it's the closest I could come.  It's amazing how hard it is to come up with a quote or phrase about "change" that works for this post.  "Small Change got rained on with his own .38" is a whole lot cooler, but it's even less appropriate, so, you get that woman's voice.

Anyway, I'm finding that the humble penny is looming large in my life recently. 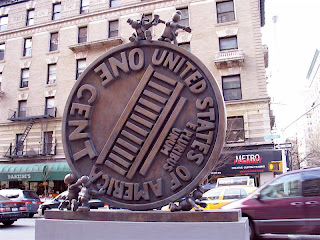 I may have mentioned before how I toss my change in a jar every time I get home and when the jar gets full, I roll it up and -- voila! -- it turns back into real money.  Honestly, it's shocking how much change you can accumulate in a year.  A few years ago, we bought a pretty expensive refrigerator with a year's worth of change. (Before you ask, yes, we deposit it in the bank and act like normal customers for the shopping portion of the scenario -- we don't show up with a wheelbarrow full of nickels, dimes and quarters.)

Once upon a time, I actually used change in my daily life, but not so much anymore.  The only time I check for exact change at a cashier is when the total is "X" dollars and some small portion of a dollar in change.  I mean, really -- if I've got some change in my pocket, I'd rather dig out 12 cents instead of getting back an additional 88¢ in my pocket.  But, for the most part, I just hand over some bills and shove the change in my pocket.  The change isn't even very good for tipping.  It may be perverse, but no tip at all, is probably less insulting than a 38¢ tip, right?  It's at least a buck or it's nothing.

As to other opportunities to use change?  I haven't even tried to use a payphone since the blackout of 2003. And that was just stupid.  Cell phones weren't working and most people's landlines have some electric component, so even if I found a working phone, the odds of reaching someone with a working phone were pretty slim.  And trying to call someone outside the effected area wasn't a lot more fruitful.

I drop off my laundry and then pick it up all washed, dried and folded.  Maybe once every few months, I'll sit there and do it myself; feeding quarters into the machines.  And even then, I tend to forget to load my pocket with quarters before I go.

All of this means that the amount of change I come home with every day should be increasing quite a bit. At the end of the year, I should have enough change to buy one of these... 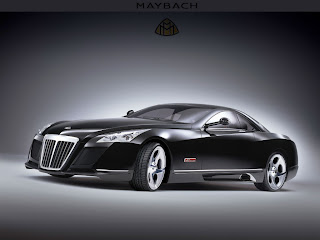 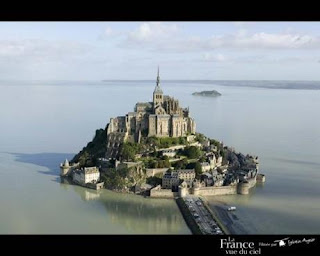 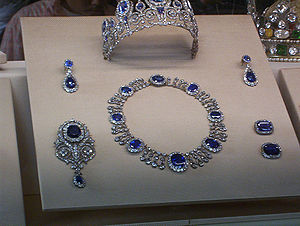 I should have a bit left over so I can bid on one of these... 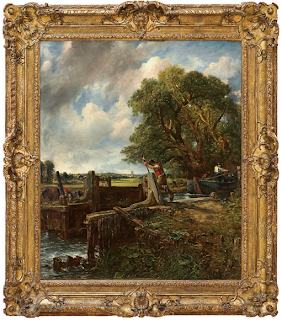 OK.  Before you start pointing out that $2.67 worth of change dumped into the jar on Thursday doesn't magically transform into $18.38 by Saturday, that's where the Hope-y part of this Change-y post comes from.  I'm trying to make a point here! Stick with me!

The problem is... for the last month, or so, every time I get home and empty my change into the jar, I've found ONE PENNY.

Now really...what's up with that?  How is that even possible? Sure, there's lots of stuff out there that has 99¢ appended to the price.  But you'd think over the course of a day, if I bought a few things that cost "X" dollars and 99¢, I'd come home with a few pennies in my pocket.  And odds are, some of those items are "X" dollars and 99¢ before tax.  I should come home with some friggin' change in my pocket.

But I keep reaching into my pocket at the end of the day and finding...

And we're not talking about one of these pennies. 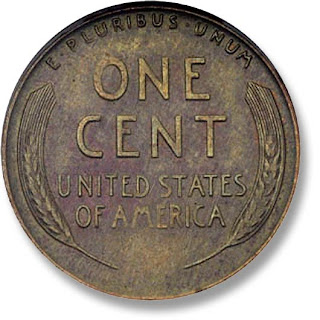 At least that would be exciting! And lucrative!   But, no...I just get normal crappy pennies worth a penny.

And at the rate of one per day, they're not amassing very quickly.  I won't, for example, be able to do this unless I wait a few years. 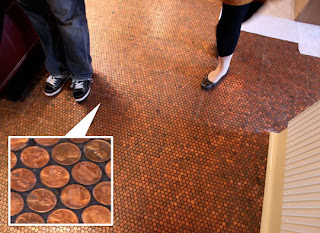 I suppose this doesn't take all that many Pennys.

Otherwise, I'm at something of a loss.
Posted by Nathan at 10:31 AM

I learned recently that it's a bad idea to travel to the D.C. area without cash. It was hard to find a taxi that took plastic, and even then they had one of those old-fashioned slider boards instead of an electronic swipe.

A few years ago, we bought a pretty expensive refrigerator with a year's worth of change. (Before you ask, yes, we deposit it in the bank and act like normal customers for the shopping portion of the scenario -- we don't show up with a wheelbarrow full of nickels, dimes and quarters.)

In college, a bunch of us in the dorm bought a pizza with our spare change. The pizza guy was not happy.

Also, this, and I promise it isn't Dee Snider.

At the current rate of a penny a day, I'll be able to get a pizza in just under 5 years.