As you all know, last Tuesday, we got to run a train into a Cadillac. Yes, some days my job is tres-cool. As usual, let's begin with one of my nifty (and highly professional looking) diagrams.

You can see the train, and the car and the two cameras covering the shot. You should imply that the crappy curved black line is the track. 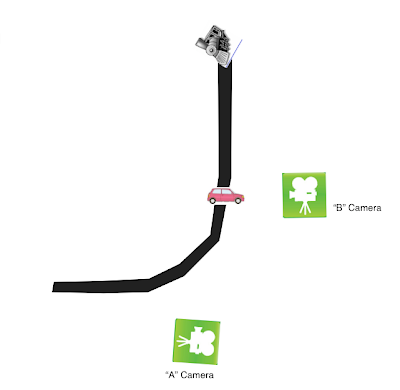 Before actually driving the train into the car (we'd only get one shot at it), we did a POV shot through the passenger side of the car at the train coming toward the car. In reality, the shot begins with the train practically touching the car and then the train backs up away from the car. Then, we'll just reverse the footage, speed it up, and presto -- it looks like a train is headed right at the camera. 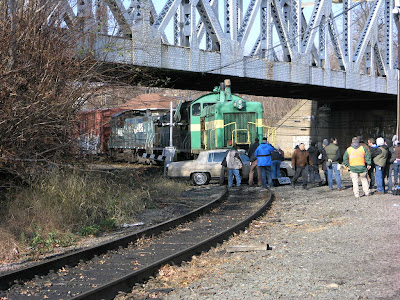 Then, we set up for the real shot. Here's the guys setting up "A" Camera. 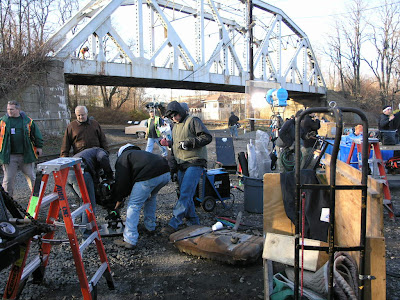 Here's "B" Camera setting up in their position. (I decided I'd want to hang out with them since I liked the idea of shooting the train as it went by me as opposed to toward me.) Look. There's a dummy in the front seat! 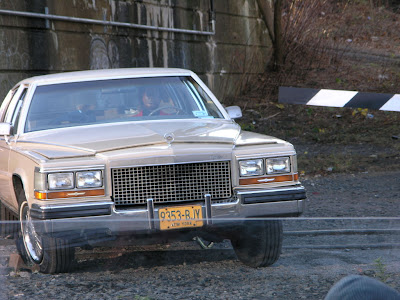 And here's the crew hanging out behind the cameras. Nobody wanted to get into this shot. I can't imagine why.

This is "last looks" before we roll the cameras. Note the guy who runs the Railyard getting a front row seat up on the bridge over the car. 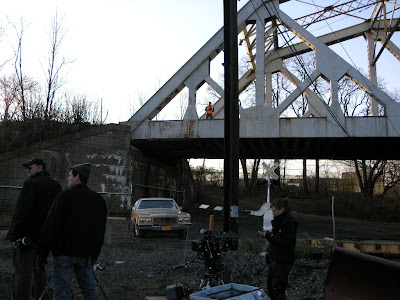 And here comes the train. 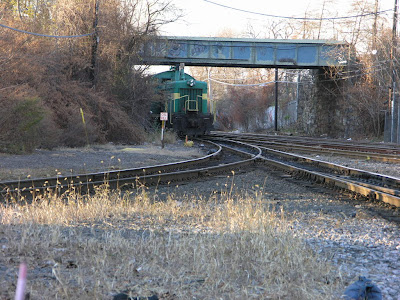 Boom! (We didn't want the car to get totally smashed to shit, since the guy in the scene is supposed to survive.) 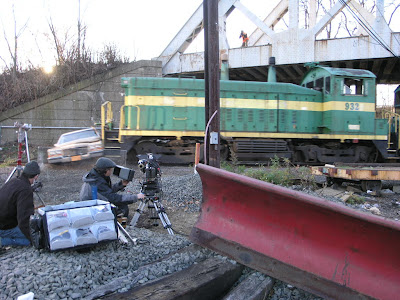 When everybody saw that the car was going to be pushed until the train stopped, the guys running "A" Camera ran. (They would have been fine if they'd stayed put, but you can't blame them for thinking it might be a good idea to get out of the way.) 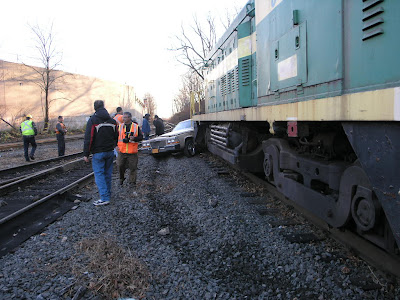 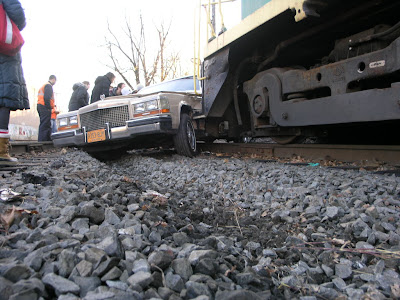 That missing back tire is under the train. 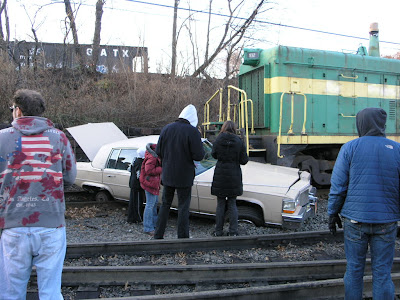 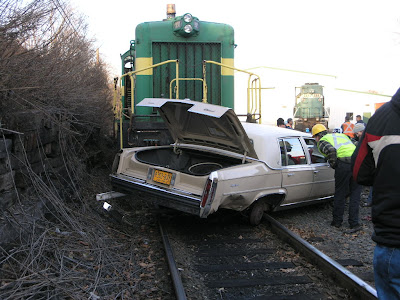 With that model Caddy it's really more like train hits mini-tank!

It's the "Big-Assed" model.

Damn that high school counselor who told me I was only good for goat herd or the military, I could have been doing this.


Very cool, Nathan. thanks for showing us.

In all fairness, didn't you get to launch locomotive sized stuff from miles away?

* No cameras were harmed during the filming of this shot. One "BA" Cadillac was somewhat damaged, but the requisite waivers were signed, and a capacity for "informed consent" had been previously demonstrated. The Caddy took it's chances.

Yeah, I think seeing the Caddy coming in front of that train would get me to re-evaluate the loyalty to my job (Caddy could catch on the track wrong and suddenly you're playing tiddly-winks, but with cars).

Nifty! Thanks for the photos and the explanations. I love learning how things work...

Nice. Thanks for sharing.