The Film Business is a small world. We, at least in NYC, tend to mostly know each other...or at least of each other. So, we're a close knit community.

But usually, not this close knit. Yesterday, we were shooting on the very same block that Damages was shooting on. I can't remember the last time we published a set map that had sections devoted to telling the crew where "Not Our Trucks" would be parked. And you'll note that they were parked right in front of our location. 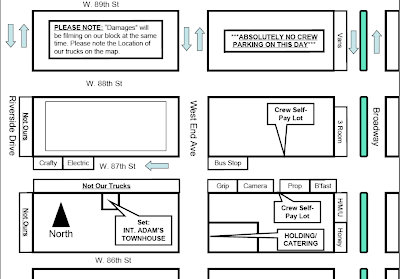 Well, we worked it out with them (and with the Film Office) in advance and managed to stay out of each others' way. They left us a gap directly in front of our location so we'd have just enough space to get our shots of characters coming and going from the house. 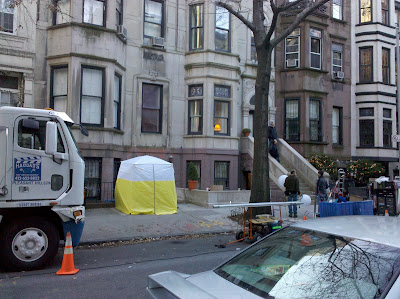 Just enough space. Aside from a couple of people who followed the wrong "To Set" signs, there was surprisingly little confusion.

And finally, there was one other thing I was struck by...and it leaves me with two conclusions.
1. Damages has what must be the ugliest Grip Truck in America.
2. The Damages Grip Crew must be supremely secure in their masculinity to be willing to work out of that thing. Oh, BTW...all photos here were taken with my "crappy little camera phone", which turns out to be not crappy at all! w00t!
Posted by Nathan at 7:43 AM