The Trump GOP Smackdown Has Been Cancelled And The World Is A Poorer Place For It.

I guess I missed it when The Donald pulled out of moderating a debate between the GOP candidates, and I'm pissed.  I don't know about you people, but I was really looking forward to it. I've only watched highlights of the other debates but I assure you I intended to be glued to screen for this one. It would have been just like a spectacular blending of McLaughlin Group with Toddlers & Tiaras.

Personally, I refuse to accept that this glorious event will never take place.  In my tradition of pounding square pegs into round holes...I bring you news of the debate from an alternate (and much more entertaining) universe. 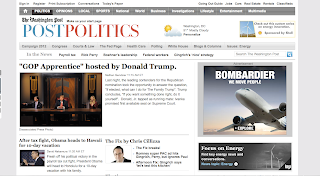 After much hand-wringing over who would participate, last night Donald Trump "moderated" a debate between GOP hopefuls Newt Gingrich, Rick Perry, Mitt Romney, Michelle Bachmann and Rick Santorum.  In the interest of "fairness", Trump also tapped Gary Busey to stand in for Ron Paul and Rosie O'Donnell for John Huntsman, both of whom had declined the invitation.  Trump declared that they were both "terrific, terrific proxies since Gary is actually a bit saner than Paul and really, how many votes could Rosie lose for Huntsman?  A loser is a loser."  Also appearing, in spite of having suspended his campaign, was Herman Cain who said he "just wanted another shot at Michelle Bachmann.  Ooooooweeeee! She's a nine-nine-nine!"

The evening got off to a contentious start when Trump introduced Rick Santorum as "Rick from Pennsylvania".  When Santorum objected, Trump expressed his disgust that a Presidential Contender would have the temerity to adopt such a foul word as his last name and that he refused to use such language in a family setting. "Have you Googled that word?  You should be ashamed of yourself", he chastised the candidate.

That this would be an unusual debate was telegraphed from the setting; the debate took place in the Boardroom viewers have become accustomed to seeing on Trump's highly rated reality series. To further the theme, Trump was flanked by Donald, Jr. and Ivanka.  Their actual participation was limited to Donald, Jr. asking his father for hairstyling advice.

The format began with a fairly traditional series of questions for the candidates, but the director's choice of camera angles was oddly jarring.  Later, it was discovered that Trump had fired the director during the first five minutes of the telecast because the director had attempted to correct Trump when he claimed that this was the "first and only debate".  He then directed that the camera be kept on him except for brief cutaways to anyone he addressed by name.  An insider says that Trump insisted America would be best served by seeing his reactions to the candidates' responses.

Newt Gingrich, who recently asserted that anyone concerned with Gay Rights should "vote for Obama", expanded on that theme by reeling off a long list of other people who should do the same.  The list included anyone opposed to sweatshops ("we're outsourcing good American jobs"), child labor ("ditto"), or the folding of the Judicial Branch into the Executive.

When Mitt Romney was asked about recent reports of wireless companies tracking and recording each keystroke customers make on their mobile devices, he brandished his phone and said, "This is indeed ominous".  Before he could continue, Michelle Bachmann angrily interrupted, saying, "Now this is what I've been talking about.  The Media keeps accusing me of saying dumb things and here you've got Mitt Romney waving his phone around and calling it 'ominous'.  I can see clearly from here that it's a Motorola!"
One of the things that separated this debate from traditional debates was Trumps willingness to insert himself into the proceedings at every opportunity.
At one point, he said to Rick Perry, "Do you mind if I sit back a little? Because your breath is very bad"*
He made the observation, "It's always good to be underestimated"* to Ron Paul stand-in Gary Busey.

Rick Santorum was advised, "Part of being a winner is knowing when enough is enough. Sometimes you have to give up the fight and walk away, and move on to something that's more productive."*

After responding to a question about foreign debt and balance of trade, Bachmann was informed, "All of the women on The Apprentice flirted with me - consciously or unconsciously. That's to be expected."*

And once when Trump seemed to have become distracted and lost interest in the proceedings, he said, "That's one of the nice things. I mean, part of the beauty of me is that I'm very rich"*

The second hour of the debate consisted of "Candidate Challenges" the most mesmerizing of which may have been the Obama Dartboard Competition.  Rosie O'Donnell was ironically closest to the bullseye and leading when Rick Perry's turn came.  Pulling a large handgun from his waistband, he obliterated the target but was judged to have lost points when the recoil knocked him on his backside.
Trump closed the evening by saying he would refrain from declaring a winner until the "wonderful, wonderful, exciting Results Show" he'd be hosting immediately after the conclusion of The Super Bowl.
------------------------------------------
*These are actual, albeit completely out of context, Donald Trump quotes!

I think it's "among the GOP candidates," not "between".

Hey wait! I put a snarky "snif" in brackets (you know, the less than greater than type of brackets), and your blog ate my snif! That snarky snif was a very important part of my comment, and your blog has no right to eat it!

You better watch it, blog! I'll Sue. Mary will too. You don't want to see Mary sue!

I snif at your alleged snif!