As I'm sure you all know, the Giants won the Super Bowl which means New Yorkers are...uh...a little excited. Before the game, I was wondering if New Yorkers would be more insufferable if the team won or lost. (I kid, I kid).  Anyway, today the city threw the team a ticker tape parade.  Not only did lower Manhattan come to a standstill for the parade, it was carried live by every local station.

Note: I have personally always thought that one of the lamest things in existence is a parade on television.  Parades are things to go to.  It's just kind of pointless as a TV show.

Having said all that, I now find myself a huge fan of Steve Weatherford, the Giants' punter.  He wasn't satisfied riding on a float in the parade, so he donned his helmet (autographed by a bunch of his teammates), borrowed a drum from a kid and joined a marching band for the length of the parade.

I love this guy! 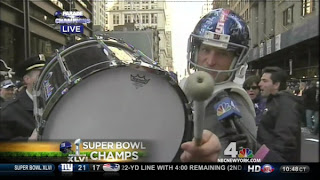 1) That's AWESOME that he decided to bang a drum.

2) The only think I watched on TV when we had any stations was the Rose Bowl parade. I liked learning about the different kinds of flowers and plants. So there.

Last parade I was at (or watched) was the NYC Vietnam one. I just hope they don't make the Iraq and Afghanistan Vets wait 20+ years.

A parade for guys making a lot more than we do for playing a game I found boring at 13.

The drum however is awesome