A month or so ago, the UPS guy showed up at my door with a delivery from Amazon  -- which I found a little strange, since I hadn't ordered anything.  I opened the box and found this: 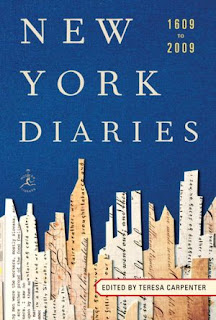 ...and pretty much zilch info on where it had come from.  It was addressed to me, so it must be mine, right?  I double checked my Amazon account and confirmed that I hadn't bought it.  And I can't honestly remember how I went about sleuthing this out, but I eventually discovered it was from Janiece!*  It turns out I had just come up on her list of people to randomly receive stuff for no reason whatsoever other than Janiece's compulsion to be awesometastic.

So I thanked Janiece and promptly put the book on my waiting-for-attention pile (cuz I had a bunch of stuff that was already in the lineup), and didn't really pick the book up again until a few days ago.

And I'm completely in love with this book and I want to treat it to a lovely dinner and take it for moonlit walks on the beach and have its babies.

No, really.  This book is absolutely fascinating.

First of all, it's exactly what is says it is -- New York Diaries.  Or to be more precise, excerpts from a bunch of New Yorker's (and New York Visitors') diaries.  Like a couple of hundred of them - New Yorkers and visitors, that is.  They include the famous, like George Washington, Theodore Roosevelt and Andy Warhol, and unknowns alike.

The book is organized by the calendar.  January 1st might have four entries from four different diarists - one from 1778, another from 1861, one from 1893 and another from 1977.  And then you continue in a similar vein through the month and then into the next month.  The entries cover from the first time someone sailed up the Hudson River on September 11, 1609 up into 2009.

Each entry stands by itself and is attributed to its author. Some of it is rather momentous (Washington recounts speaking to Congress).  Some of it is utterly mundane.  You can refer to a section in the back of the book for a mini bio of the author of each passage. (More on that later.)  You want some examples?

On New Year's Day, 1851, Inspector William H. Bell (a Police Detective) writes - "On duty at the office all day between 12 & 1 o'clock helping give out new year's cake at the Hall. In the evening went up to the 18th ward Station House saw there the young man who was thrown out of the sleigh & killed at the corner of Madison Avenue & 29th St.  I called on Alderman Atwood [sic] had a good time of it -- went home."

Or there's Maria Lydig Daly** in 1863 - "Mrs. Ritchie is a pretty woman who aids nature a little by art. her hair was dressed in the modern Phrygian style in two great hills on either side of her head, the center being occupied on full-dress occasions with a bunch of hair full of feathers, birds, or flowers.  One lady, a Mrs. Ronaldi, who is now the toast of the town, wears a bird's nest with eggs, making her head a hatchery.  I doubt if there is enough brain there to hatch anything.

From Catherine Elizabeth Havens, a 10-year-old shipping heiress in 1850 -- "...I have a green silk [dress] that I hate, and the other day I walked too near the edge of the sidewalk, and one of the stages splashed mud on it, and I am so glad, for it can't be cleaned."

Charles Ritchie, Canadian Ambassador to the U.N. in 1958 - "I had forgotten how much Americans love talking on social occasions about international affairs and how earnestly distressed they are about the conduct of everyone everywhere."

And I can't find the quote right now, but someone in the 1980's is describing a bad dinner of oysters at The Grand Central Oyster Bar followed by a long bout of not being able to get a cab home on a bitingly cold evening -- and then chastising himself over how much easier it would have been if he'd just taken the subway. He concludes, "The thermia was never more hyper."

I love lines like that (and hate other people for coming up with them when I never do).

Anyway, I'm not entirely sure how I'll go about reading this book.  It's probably best done in short spurts.  1.) I find myself constantly referring to the bio section in the back of the book to know just who it is who's speaking. (As I read more, I'll probably have to do that less, since many diarists have multiple entries).  2.) The book doesn't lend itself to just plowing through as I would with a narrative. Many of the entries are fairly light, but a number of them just beg you to sit back and absorb them after reading them.

I would definitely not recommend reading this on an e-reader. I'd make myself completely batshit if I tried leafing back and forth to the bio section on my nook.  To be honest, this is one of those rare books that I'd probably enjoy more if I were reading it on my computer -- but only if each entry had a hypertext link to the author's bio that would open in a separate window.  Lacking that, this one's best read on a big ole dead tree.

Oh, Oh, Oh! While we're on the subject of things I love, I have one more thing to recommend.  If you have Netflix, you must watch Lilyhammer, starring Steve Van Zandt and a bunch of Norwegians.  He plays a mobster who rats and then gets witness relocation -- to Lillehammer because he saw it on the Olympics and thought it might be nice there.  The show is absolutely hysterical.  All 8 episodes of the first season are available streaming on Netflix.
-------------------
*I'm betting it wasn't very impressive sleuthing; otherwise, I'd remember.  I probably just asked "who sent me a book?" on every social website I could imagine.

**Mrs. Daly's bio makes her sound a complete curmudgeon.  She ignored her family's objections to marry an Irish Democratic reformer; hated Lincoln, blamed Abolitionists for causing the war, and yet was a staunch defender of the Union.

I'm glad you're enjoying it - when I heard about it on NPR, it just kept whispering in my ear, "I would be PERFECT for Nathan. I would make him HAPPY."

And you told me you called Amazon to find out who sent it. :-)

Well I guess that was pretty ingenious of me.