The Customer Is Always Wrong...

Except when he argues long enough and loudly enough. And has documentation in triplicate.

I guess I'm not even annoyed by this any more. Does it make me sound old to have only recently become convinced that every company I do business with will screw me...as a matter of course..if I don't debate the issue?

Let's start with Verizon Wireless.  I got a new phone a couple of days ago.  It's a shiny new Samsung Galaxy SIII (4GLTE) whatever all of that means.  It's shiny and I love it and it does lots of stuff and it's really quick and I want to have its babies!

The woman (Jennifer) at the Verizon store in Allentown, PA couldn't have been nicer or more informative. And HOLY CRAP was she patient with me. BUT, the moment she started ringing up the sale, two of her associates descended like locusts and tried really, really hard to sell me more crap. 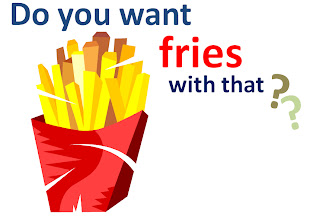 They left.  Did I mention that Jennifer managed to find me a plan that's going to save me a BAZILLION dollars a month?  Well, she did.  Part of it involved  getting rid of my mobile USB broadband doohickey because now I'll be able to use my phone as a hotspot. (I'll need to watch my usage to make sure I'm paying for enough GB per month and not getting killed on overages, but I should be fine.)  Anyway, she said she couldn't cancel the account on the doohickey, but if I called the 800 number she was including, I could cancel it myself.

So I called Verizon Wireless to cancel the USB doohickey.  Everything went fine until we got to the billing part.  Verizon Wireless bills you monthly, in advance, so the guy was telling me that I'd already paid through September 25th but after that, I'd never see billing for it again.  Long story short...I had to argue with him for 15 minutes and get him to talk to a supervisor before he figured out how to issue a credit for the 3 weeks I'd paid that I wouldn't be using. Because, apparently, Verizon Wireless is the only company in the known universe that doesn't know how to issue a credit without an advanced tutorial and a gift of three virgins to the Volcano Gods.

And I guarantee 80% of the people who should get a credit don't argue the point...so Verizon Wireless pockets the money.

Then, there was my hotel.  We were at a Homewood Suites; part of the Hilton Honors system. When I made the reservations, I had to change something, and it was easier to call the customer service line than to try to make the change online. And, once again, the primary person I dealt with couldn't have been better. My reservation promised me one rate for the first two nights and a $20 cheaper rate for the third night.  Of course, when I looked at the final tally slipped under my door before checkout, they had charged me the same full rate for all three nights.

So, I went to the front desk, thumb drive in hand with copies of my confirmation email.  I said I'd been overcharged for the third night's stay and quoted her the rate I was supposed to be paying and the woman said, in a distinctly snotty voice, "And where does it say that?"

So, I handed her the thumb drive.  That one was solved fairly easily.

Hey, it's not the $20. It's not even that companies' mistakes are always in their favor.  It's the universal attitude that I'm trying to pull a fast one and they force me to act like total dick just to get what they promised me in the first place.

And now, I'll hop off my soapbox and find something cheerier to get my day started.

Update: I just thought I'd add something I found pleasantly surprising.

The Enterprise Car Rental place near me wasn't open yesterday when we got back to town, so I was stuck with a fourth day of car rental whether I wanted it or not.  My goal was to get the car back to them by 9:30 this morning to avoid any more charges.

Now I've talked before about the Gas Scam that all rental car places pull.  You get the car with 1/2 a tank and if you return it with less than 1/2 a tank, they charge you $1.50 more per gallon than the most expensive gas you can find in the area to bring it back up to 1/2 tank.

But how did it ever get to 1/2 a tank in the first place.  Obviously, they charge people to refill the tank, but they never actually do put any more gas in it unless it shows up running on fumes.

So, we got the car with 1/4 tank of gas and I misjudged a little and I was returning it with 3/8 of a tank. (I suppose I could have driven around the block a billion times until I got it down to 1/4, but that falls into the category of "not worth the effort".)

Anyway, I jokingly asked the guy if I was getting a credit for returning the car with too much gas, and---Holy Shit -- he said, "Sure, it's about 2 gallons, so how about I credit you $11.00?"

I swear you could have knocked me over!

Update 2: And another thing...

Earlier today, I bought an ebook straight off of Baen Books' website.  Literally while I was pressing the "confirm order" button, I realized I had already bought and read the book.

When I got the email receipt, I sent a reply (Baen doesn't send a blind "do not reply" type of thing, a reply finds it's way to a person), saying I had already bought the book once and could they give me a credit toward a future purchase.

Within an hour, I got a reply saying they were issuing a refund.

These companies are fucking up my entire premise!
Posted by Nathan at 7:35 AM

Don't you want to do your part to make Corporate America stronger? Don't you recall Kennedy saying "Ask not what Corporations can do for you, but what you can do for Corporations?" It's the Corporations that provide jobs in America. Your job working for godless Hollywood interests for instance. What are you, a communist?