Suburbia Both Fascinates and Frightens Us. But That's O.K...We Might Not Really Be Here Yet.

So Anon GF and I are in the wilds of Eastern Pennsylvania...you know...the suburban wilds.  Both of us grew up in some version of Suburbia, but we've been living in an Urban environment so long that neither of us really believes Suburbia exists anymore until we experience it again on one of our periodic trips beyond the Hudson River.

I know most of you live out here, but lemme tell you...it's really weird.  And from my point of view, Supermarkets are the best demonstration of wonderful and weird that Suburbia has to offer.  Or, should I say SUPERmarkets.

We took a leisurely drive yesterday, leaving Brooklyn a little before Noon to beat most of the weekend warriors onto the road.  We stopped in Easton, PA and had a really nice lunch at a cute little place.  Here's a picture of our cute little red rental VW Bug enjoying the cuteness of Easton, PA while we were dining. (Who knew you could rent a cute little red VW Bug? I usually get stuck with a white or silver Taurus!) 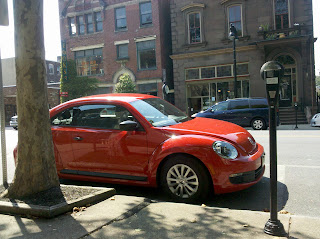 So anyway, we eventually dawdled our way toward Trexlertown. PA.  This is not a normal destination.  Our destination was to be in the general vicinity of Bethlehem and Allentown, but we kinda like staying at Homewood Suites Hotels and the one we've stayed at before was sold out, so we just made a reservation at the next one down the road.  Who spends a bunch of time in the hotel anyway, so we only care that we'll like the room...not so much that there will be great stuff right outside the back door.  (There isn't.  But more on that later.)

Anyway, since one of the reasons we like staying at Homewood Suites is the little kitchens, we stopped off at a SUPERmarket to get some snacks and stuff to stock the kitchen.  On the way to the SUPERmarket, we were passing through some area where there was no evidence, whatsoever of a town.

I don't mean we were driving through beautiful (or even not-so-beautiful) country.  That, we like.  No...we were driving through an area of housing developments that all had their backs facing the road.  They all seemed to have been built in massive chunks, so you'd drive by one development where the same three house designs were repeated over and over again, and then you'd know you were passing a different development because the three house designs changed somewhat.  And this was going on for about five miles.

Cut to: Arriving inside the SUPERmarket.

You could fit about 6 of our neighborhood supermarkets into that one Wegman's SUPERmarket we visited yesterday.  Did you ever see Moscow on the Hudson?  This is kinda how I felt walking into that store yesterday.

As much as I loved the store, it's more than a little overwhelming if you're not used to it. First, there was the finding of snacks.  We thought we'd found the snack aisle, but something was wrong.  Where were the Lay's Potato Chips.  Where were the Cheetos?  Where was the Chex Mix?  Eventually, we realized we were within the SUPERsubSUPERmarket. A store within a store (the size of our neighborhood's entire store) that was dedicated to natural healthy stuff.  I'm talking raised by Virgin Tibetan Monks, watered by the urine of pure white unicorns, grown to an audio track of a chorus of innocent 7-year-old girls singing hymns to Gaia kinda natural and healthy.

Eventually, we found our way to normal snacks. (There were a bunch of baked, fat-free things there too, but we were able to focus on the goal and get the real stuff.)  We also found a bunch of other stuff we decided we needed. (So much for focus.)

The Market Cafe is kinda like one of the pay-by-the-pound salad bars you find in NYC delis. Like this: 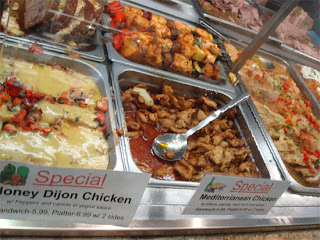 Only not like that. At the Market Cafe, it's really appetizing looking.  And there are choices of about 100,000 types of entrees and salads and side dishes and bagels for tomorrow morning and pie and cake and tarts and tortes for dessert tonight.  And there's about 4 acres of the stuff.

And you hear Celestial Angels singing as you turn the corner and see it.

Our jaws dropped.  Our eyes glazed.  There may have been drooling involved.

Now, remember...we had had a lovely lunch. Tonight's dinner is already reserved at Emeril's. We decided that a meal of a few small items from the Market Cafe taken to the hotel while watching HBO would be just the ticket.  We got chicken and stuffed peppers and Caprese salad and roasted veggies (a couple of kinds) and a pound of peel and eat shrimp and beer and bagels and grilled-chicken pasta and a lemon meringue pie and a few other appetizers and...O.K. maybe we got more than a few small items.

Then we encountered THE SIGN.  At the register, there was a sign saying that you could only pay for items picked up from the cafe (and beer) at that register. You must go to the other registers to pay for the the items from the SUPERmarket.   So I ran and got another cart so we could attempt to separate our items into Market Cafe payable vs. SUPERmarket payable items.  This is not easy.  There aren't really any good clues as to how to separate them.  There's not a good geographical demarcation for one vs. the other.  Some items that you spoon into a container are Market Cafe items and some are SUPERmarket items.

Here's how you know what you can pay for at the Market Cafe register.  If the Eighty year old cashier smiles at you and runs the item over the scanner, you're O.K.  If she looks at you like a Ten-year-old who has suddenly forgotten you're potty trained and calls for a manager, you've transgressed.

While Anon GF suffered the glares of the Market Cafe cashier lady, I took the other cart and went to the Self-Pay station in the SUPERmarket.  This is also a wonderful experience.  First, you stand in line while someone tries to find the UPC on each item and more and more frantically waves her items over the reader.  Eventually, it's your turn.  Each time you successfully wave an item over the scanner, it yells at the top of it's robotic lungs something like "UNHEALTHY SNACK FOOD ITEM THAT WILL KILL YOU BY MORNING IF YOU EAT IT...$14.95!"  or 'EMBARRASSING PERSONAL HYGIENE ITEM SURE TO MAKE THE PEOPLE WAITING IN LINE BACK UP A STEP OR TWO ... $16.38!"

Eventually, we made it to our hotel.  I've only got two things to say about the hotel so far. First, I'll let the sign on the inside of the room door speak for itself. 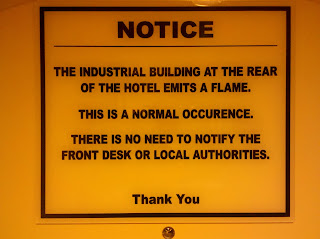 Second, there's apparently some weird time-portal nexus at our hotel.  This morning, I went downstairs to get some coffee and danish from the morning buffet.  I also picked up a newspaper from the stack on the table near the elevators.  When I got back to the room, I realized it was yesterday's paper.

A little later, I went to get something from the car.  On my way back up to the room, I noticed they'd changed the stack of newspapers, so I picked up another one.  This one turned out to be Thursday's paper.

You two will need to trade in your cute little VW bug for a Hummer if you keep snarfing your way through the restaurants and supermarkets of the suburban wilds. While reading, I had an image of PA calling in disaster relief assistance for the famine resulting from their sudden food shortage.

Have fun, and definitely try to find the time portal and send me the coordinates. I have a plan........ mwahahaaaaaaaaah.

I lurve Wegmans! We stop there when we visit my aunt--they have really good made-in-store breads. And croissant. And cookies. And pastries.

I was at Wegman's this morning.

For future reference, you can pay for everything at the regular checkout counter, but only some things at the market counter.

At my local store, they've managed to parlay the market foods counter into giving them restaurant status, thus allowing them to sell six-packs of beer!