The Devil In The White City - A Review 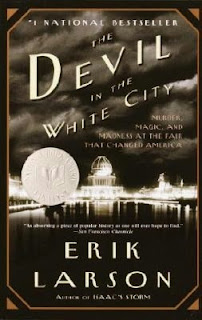 I just finished reading this book and it's amazing, fascinating, engrossing and a bunch of other words I could apply to a book I really enjoyed.  First off...it's non-fiction, and I just don't read all that much non-fiction.  I won't say I don't read any non-fiction, but to be honest, most of it's written really dryly and I have a hard time sticking with them even if I like the subject.

This book is written like I'd expect the script of a Ken Burns documentary to be written. (I don't know whether or not Erik Larson would consider that a compliment, but I do.) The story is told in a very easy narrative style interspersed generously with direct quotes from the people involved -- both the notable and unknown folks.  Little interesting side-factoids are dropped all the time.

The story begins in 1890 with a few American cities competing for the honor of hosting a Columbian World Exposition (A World's Fair) to commemorate the 400th anniversary of Columbus discovering America.  The finalists are New York, Chicago, St. Louis and Washington D.C.

Chicago especially wants the fair in order to establish themselves as a world class city -- not just a place with a large population and a bunch of meat packing plants. If they win their bid, they'll not only have to perform beyond expectations to hold their heads up in the U.S., they'll have to outdo the show Paris put on just a few years earlier; an exposition that featured the Eiffel Tower, then the tallest structure in the world.*

The book would be interesting enough if it were only about the fair, but the story is juxtaposed with the story of H.H. Holmes, America's first serial killer -- who just happened to be on the loose in Chicago at the same time.  With all of the new jobs available in Chicago and all of the anonymous visitors coming to see the fair, the pickings were ripe for Holmes and it took years before anyone connected the dots and realized there was a single killer on the loose instead of just a bunch of random disappearances.

-------------------------
*I won't give it away, but the planners for the fair were at a loss for quite some time to come up with an idea to "out-Eiffel the tower".  Many people presented plans for taller towers (including Eiffel himself), but the folks planning the fair were adamant that it be something else new, unique and impressive as all hell.  It wasn't a fact that I was aware of, but I'm proud to say I figured out what the fair came up with before it was revealed in the book.

I'm glad it was good, because I found his last non-fiction book distinctly meh.

Good book. It's amazing how much police work has changed in a century. I liked "In the Garden of Beasts" OK. I'm an amatuer WWII historian so, while it was slow, it had something for me.

"Out-Eiffel the tower" in Chicago. It was wind, right?

This book has been on my wish list for awhile--Glad to see a positive recommendation.

I like Larson's prose. I enjoyed Devil and Thunderstruck; Garden Of Beasts is in the pile, but I haven't gotten to it yet.