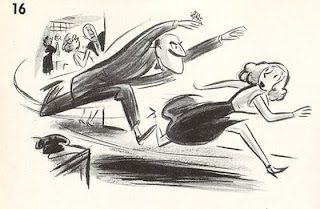 There's a lot of hand wringing going on because apparently some Secret Service Agents and other members of the President's advance team may* have spent an evening with some prostitutes while getting ready for Obama's trip to Columbia. Do I think they did?  Of course they did.

Am I upset about it?  Think its some kind of big deal?  Au contraire mon freres!  Those guys are paragons of frugal government.

Look...the General Services Administration is in a heap of shit because they spent nearly a million bucks on a convention.  They had clowns and fortune tellers and shit.  They had cheese platters.

THEY GOT RIPPED OFF!  I mean, c'mon; the guys who are supposed to save the government money couldn't get a fucking clown for a couple hundred bucks?  Pikers! And that was your money!

The Secret Service, on the other hand were hooking up with Trollops-For-Less™.  I've heard these girls were going for $47 a pop! And the only reason they got caught is because one guy thought it was too much! (That's what I heard anyway.  You can SnopesThatShit.)

Another comparison?  You can bet those GSA pukes were expensing every damned thing!  Nobody's accusing the Secret Service of trying to put the girls on Petty Cash.  Talk about living within your Per Diem!

Those guys are my heroes. I couldn't be prouder.

Update:  I'm now seeing a report that says the guy who wouldn't pay had originally agreed to shell out $800!  This does not alter my premise.  It only backs up the idea that these courageous gentlemen are even more thrifty than I first imagined.  A GSA twerp would have paid the $800 and forked over a $300 tip!

It was Colombia: I mean, c'mon, what were they supposed to do, sample the country's most famous export, instead?

Unless maybe that's what they were doing with the hookers....

I'd only object if they weren't taking advantage of discounted local rates.

Trollops For Less is the name of my next band.

Here's the thing, really cheap hookers are often, shall we say, somewhat inclined to give a little something not mentioned during the negotiations*. When the guys come home they keep on giving that gift. This leads to a heavy impact on the ObamaCare plan. So maybe discount hookers aren't the best thing to keep the budget balanced.

* Of course I don't know this first hand. I just read a lot. Really.

We've got that covered too!