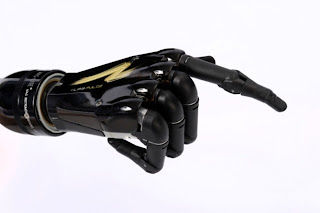 See this really cool bionic-type hand?  I didn't get one of these this week.  It looks like it could do all sorts of nifty shit if you had one...but I wouldn't know.  I didn't get one.  I will, however, point out, that if I had gotten one of these, I'd think the test of it's awesome powers would be whether I could bend iron bars between my fingers, or open beer bottles without the proper tools, or whether I could leave an indelible fingerprint etched into titanium with no effort whatsoever.  But that wouldn't be the test at all.  Oddly enough, the test would be whether or not I could peel a banana with my super hand without crushing it...which I can totally do with my natural-normal non-bionic hand!  And that leaves me wondering (a little) what the point would be, but nobody pays me to wonder that sort of stuff, so I'll wonder more when I get offered a better contract.
Anyway...I didn't get anything remotely bionic this week.  The truth is that I didn't really get any kind of replacement or augmentative parts, but I kinda felt like I was getting things like that all week. Only, the bionic parts I felt like I was getting, were distinctly non-powered parts.  Like, if I had  gotten a bionic hand this week, it would have been just oatmeal stuffed into a rubber glove.  And if I'd gotten a bionic leg, it would have been like those sticks the guys carry in the parks with nails on the end to pick up litter...and every step I would have taken with my non-bionic nail-stick leg, would have involved stopping for a minute or two to unstick my leg from the ground and from whatever litter I might have picked up along the way.
I don't have bionic eyes, but my glasses work pretty well when I wipe the schmutz off of the lenses.  But, you know what?  I'd like something bionic.  Or at least something that seems bionic.  Hell, I'd settle for the sound effects.  Remember when Lee Majors was gonna run really fast, but they were too cheap to actually make it look like he was running really fast, so they made that noise like "nuh-nuh-nuh-nuh-nuh-nuh-nuuuuuuuuuuuuuuh", and he moved in really slow motion, but they made the bad guys move in even slower slow motion, so he totally looked like he was going super bionic speed (well, not really, but I was like thirteen years old so I was pretty easy to fool).
Yeah...I'll settle for some bionics good enough to fool pre-adolescents.  Please let me know when to expect delivery on that.
Posted by Nathan at 8:16 PM

So, what you're saying is you'd like to be like Doctor Octopus with four bionic arm-like thingies? Or maybe become a Bionicle?

Bionics are all they're meant to be. And, yeah, I work there (although the arm is in a completely different state than I am).

mactimp - what I almost was, a mac temp and a chimp thrown together.

Meant to say, "aren't all they're meant to be." Because they really aren't all that strong yet.