A Story Not Likely to Be Repeated.

On August 17th, Bill Millin died at a nursing home in western England.  He was 88 years old and the cause is listed as stroke.

On June 6th, 1944, D-Day, Mr. Millin was a 21 year old private in Britain’s First Special Service Brigade and was among the first troops to land on Sword Beach. Shortly before the landings, Millin was approached by his commanding officer, Simon Fraser, who was also Lord Lovatt, hereditary chief of Clan Fraser and informed that his assignment was to play his bagpipes during the landings. Millin pointed out that regulations had forbade pipes playing in forward areas since WWI, but Lovat replied, “Ah, but that’s the English War Office. You and I are both Scottish, and that doesn’t apply.” 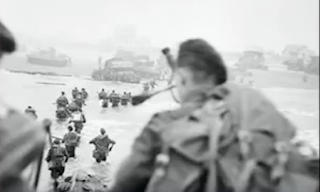 Private Millin in the right foreground debarking from landing craft.
Throughout the landings, Millin marched up and down the beach playing highland tunes on the pipes.  Later, captured Germans said they hadn't shot at him because they thought he was crazy.  As British troops moved inland, Millin found himself alone on the beach.  "As they moved off, I found myself left on my own", he later said.  "No one told me to stop playing, so I had to run after them and catch them up."

As the Allies moved inland, Millin's unit was tasked with relieving British Paratroopers who had taken a bridge near the Village of Ouistreham.  The Germans were trying to retake the bridge as it was a key route to any counterattack on the beaches, so the Paratroopers were under heavy fire.  Once again, Millin was assigned to play his pipes as his unit crossed the bridge under fire.


I don't imagine anyone will ever again be issued similar orders, but you've got to be awed by the man's courage, not to mention chutzpah!  What brilliant lunacy!

Millin continues to be regarded as a hero in France where he was awarded the Croix d'Honneur and two other decorations for gallantry. There are plans to erect a statue of him there.

Reminds me of the color bearers during the Civil War. And amazing as well that the Germans didn't shoot him, deciding he was crazy.

Well done, Mr. Millin. And this was a WWII story I didn't know, so thanks for sharing it.

There is a fairly good re-enactment of it in the movie 'The Longest Day'.

ANd with that story, does anyone doubt how much I could love my new job? THAT is what needs to be kept and preserved. Thanks Nathan!