Yay!  It turns out that if you live in NYC, you're the proud recipient of FREE SUSHI!  Here's the deal.

NYC gets its water from a bunch of upstate reservoirs.  The water is so clean that its exempt from Federal and State filtration requirements.  It's pumped into pipes from roughly 60' below the surface of the reservoirs and, basically, comes straight to your tap. I know they add chlorine and fluoride somewhere along the line and there must be some kind of screens involved, otherwise, the pipes would get clogged with fish.  But, otherwise, we're drinking water straight from the lakes! 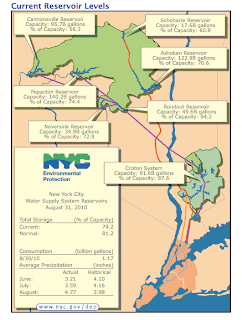 I'm not going to go look for the stuff, -- you guys know how I hate documenting things -- but NYC tap water also rates among the tastiest in the nation year after year.  (There's blind taste testing and stuff and somebody with time on their hands does that stuff and tells the rest of us about it eventually.)  Some podunk in Wisconsin apparently has the best tasting water, but since there's only like 12 people living there, who gives a rat's ass?

So, back to the sushi.  It seems that some itty-bitty microscopic shrimp get through the screens and we're all drinking shrimp with our water.  They range from .8 to 1.4 mm in length (the females are the bigger ones -- stupid big females). They're actually known as copepods (who knew?) and they do nifty stuff like eating mosquito larvae.  Yay copepods! (cough, cough, gag.) 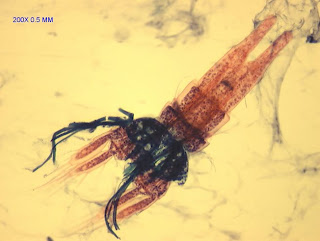 Of course, the first thing I thought of when I read about this was, "Holy Crap!  Does that mean the water isn't kosher?"  I thought I was kidding, but no...it turns out I"m not.  OUKosher.org recommends installing a water filter and some other stuff, which, I guess is reasonable.  I mean, keeping kosher requires jumping through quite a few hoops already; is adding a water filter to the mix really that much more work?  (When I was in working in Cincinnati, we had to use bottled water to make coffee.  I don't know if things have changed there, but in the mid-90's, their tap water was nasty!)
I'm not going to go back to keeping kosher, so I'm not going to bother with the filters.  In fact, I'm going to consider the sushi a freebie!  And my doctor said I should be eating more seafood!
P.S.  Thanks to Steve, I was able to participate in yet another utterly pointless exercise!  If you download IOGraph, you can create a visual record of everywhere you mouse has moved for as long as you like!  Here's what it looked like creating this post: 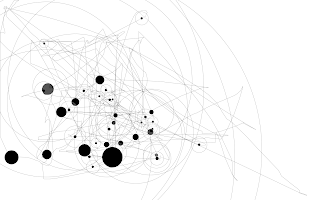 The great thing about this, is, that unlike other pointless stuff on the internet, this one does its bit while you're doing other stuff.  It isn't even a waste of time!
Posted by Nathan at 8:52 PM

Glad to be of service, Nathan. Steve B., helping others waste time on the internet since 1995.

And just having small shrimp is no big deal, unless you're being kosher. And I'm not sure life at that size should qualify.

There's a lot of other things in that drinking water that you just don't want to know about (or at least in many parts of the country). For our little berg, we tap into an underground river as it flows through a boulder field about 100' below the surface. The water there is about a century old (by the time it percolates from the surface). And our major problem is the lead that's dissolved in it (we have a big filtration plant to take out most of it).

I'll leave it to those who keep kosher to decide what's worth worrying about, but in this case, it's more a matter of "intent". If the shrimp are microscopic and nobody knows about them, you haven't broken any rules of kashruth by drinking the water. OTOH, if you purposely avoid finding out about them, or ignore them once you know they're there, then you're breaking a rule.