You may recall the episode some time ago when John The Scientist made me eat Stinky Tofu. OK, he didn't so much make me eat it as he double-dog dared me to eat it. And since I've attained the maturity of a 4-year-old, of course I accepted.

Today, John is in our Nation's Capital and he's meeting up with Neurondoc for a lovely meal.  I know he was taking her to a place that serves Stinky Tofu, and last I heard, she may, in fact, have tried the stuff.  I'll let one of them report.  But I do have to say that I'll be mildly disappointed if she caved and tried any.  I mean, hey -- I'm just some doofus who works on movies for a living.  She's a freakin' highly educated BRAIN DOCTOR.  I'd hope she'd have a little better impulse control than me.  Ah well.

Since we're on the subject of disgusting delicacies, I thought I'd make you aware of something I discovered online today: Surstömming.  Like many "delicacies", Surstömming turns out to be something someone's ancestors used to eat because they had no way of preserving food and now, the food is a tradition and young people have to pretend they actually like it.  Essentially, it's herring that's been left to rot for 2-6 months (or more!) and then eaten.  Here's a hint.  Remember how your mother taught you not to buy stuff in dented or bloated cans because it was a possible sign of botulism?  This is what a can of Surstömming is supposed to look like before you know it's ready. 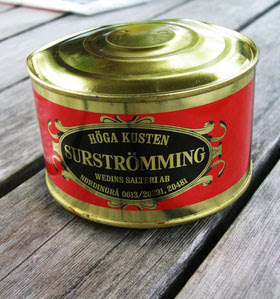 For many, surströmming is known as one of the most offensive delicacies in the world, rivaling other objectionable treats like southeast Asia's durian fruit or Norway's lutefisk. The foul odour comes from a cocktail of different bacteria that produce carbon dioxide and numerous other compounds. These conspire to create a smell similar to rotten eggs mixed with rancid butter and vinegar. A website dedicated to odd foodstuffs describes the delicacy as "the foulest-smelling food you can ever imagine."

The stuff is banned on Air France, KLM and British Airways flights because the airlines consider the cans to be "potentially explosive".  While some Apartment buildings prohibit bringing the delicacy into the building, others merely suggest that you put up a sign notifying your neighbors that you'll be eating it so that people know there isn't a gas leak.  Others recommend that you only open the cans under water or in a freezer to contain the initial (and worst) release of stink.

I'm letting it be known here that nobody stands a chance of shaming me into trying any surstömming.  I'm officially off most any fermented food you can think of.  Except maybe fermented unicorn.  I don't know how unicorn is traditionally prepared, but I'll defer to others' knowledge of the subject if they can get their hands on some good prime unicorn!
Posted by Nathan at 11:14 PM

She ate it. I'll let her describe it. And you do konw I'm going to Sweden soon, right?

Fine. Consider this fair warning that if a can of that stuff shows up here, I'm calling HAZMAT to deal with it.

There is one person involved in the bug pop episode whom we missed, no? :D

I did eat a bite. Clearly I have inadequate impulse control. If John ever emails me the picture he took "at that moment", I'll post it.

Okay, okay, okay. For all my talk of culinary adventurousness, even I have to draw a line at something that looks like it might have contributed to the loss of the Franklin Expedition.

trown: verb, to find yourself over-your-head in the city, at risk of death. "On his first trip to Los Angeles, Farmer John quickly found himself trowning and no-one to throw him a line."

John...I'm not sure who we missed?

I'd be worried, it obviously affected her brain - she referred to you as normal!!

Michelle was the third trollop on that expedition...