I swear I'll come up with something to tell you about other than how much this hotel is entertaining me by failing to entertain me.  But I walked by this sign in the lobby today and I just couldn't resist! 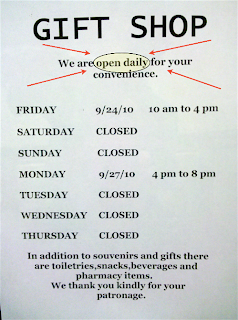 The sign isn't the only thing that's really sad.  There's a mezzanine-level restaurant called "The View", which, presumably, is named for a lovely view of the valley and some mountains in the distance.  Like everything else here, it's never open.  Except, last night, it was open.  In a fit of utter laziness, I decided I'd try the place instead of getting in the car and going anywhere else.

They opened at 6:00pm.  I showed up a little after 7:30pm.  The hostess and another employee(?) were sitting on a couch at the entrance.  Otherwise, the place was empty.  I was told I could sit anywhere and chose a table that was visible from the entrance "so the place would look crowded".  (I try to be helpful.)

The hostess went downstairs to find the waiter and let him know they had a customer.  He was nice and very attentive. Possibly a little too attentive.  He wanted to chat, but I was reading a book, so he took the hint and left me to it.  I ordered a Rib-Eye.  It was actually a great steak, which was, unfortunately ruined by the chef cooking it in a vat of salt.  It was like chewing really tender ocean.  Ah well.

Shortly before I was done, two other diners (!!!!) showed up.  They had a reservation!  They didn't want to seem silly, so they explained to the hostess that they'd been worried the place would close early if no-one was there, so they figured the reservation would keep the staff waiting for them.

At any rate, I can totally understand why nothing is open here.  The hotel would just be paying staff to stand around looking at empty tables and shelves full of stuff that nobody even looks at.

It is sad.  The restaurant had a total of three customers last night.  If you count the waiter, the hostess, the chef, and I'd guess a dishwasher, there were at least 4 employees working to serve three people over the course of the three hours they were open.  I tipped over 20%, but that only amounted to four dollars and change.  Maybe the other two customers' tip doubled that.  So the staff split, maybe $15 in tips.

I weep for them.

On the good side of life upstate, I dropped off some laundry at a wash-and-fold place yesterday.  I had stuff to do in the morning, so I didn't get around to it until after 1:00pm.  The woman explained that it was too late for same-day service and they didn't do wash-and-fold service on Sunday, so I wouldn't be able to pick it up until Monday afternoon.  I said that'd be fine; I have enough clean stuff to see me through.

The woman from the place called me at 10:45 this morning to let me know my stuff is ready and I can pick it up today if I get there before Noon. Yay for people and places who do better than promised.

Things are looking up!

OK...One more update:  The "Wash-N-Fold" sign is a little bit of a misnomer.  My clothes are nicely clean. Nothing is folded.  I have T-Shirts and shorts on hangers.  :)
Posted by Nathan at 6:37 PM

Yeah, if they were putting up a special schedule for the Christmas holidays, that's a pretty stupid line to leave on the sign. And why the heck are they advertising Christmas hours in September, anyway?

I fail to see the objection. They say they're open "daily," Friday and Monday are days. They're certainly not open nightly, unless you count until 8 p.m. on Monday, though I'd really call that "evening-ish" depending on what time sunset is that day.

That sign is really, really sad. They had dreams once...long ago. I hope you tucked a twenty under the gate.

I'm not objecting; I'm agreeing with you. :) It's stupid.