A Funny Thing Happened On The Way To The Market.

Earlier this afternoon, I volunteered to go do our grocery shopping.  Yes, yes.  I am, possibly, the best, most magnanimous, (insert superlatives, ad infinitum), man who ever existed.  It's difficult to bear the constant approbation, but it's my cross to bear.  And, as with all other things, I bear it with excellent grace.  But the following observation of mine does not center on my stellar qualities, myriad as they may be.  Let me start at the beginning.

I hopped into the car (which we currently have due to GF's job -- she, too, is stellar), and took off, meaning to fill it to overflowing with the finest of comestibles.  Having driven two blocks, I arrived at Myrtle Avenue, only to be reminded that we are in the midst of "Move on Myrtle*", a period of 2 months or so, when part of Myrtle is closed to traffic every Sunday so that an impromptu-ish street fair can pop up, (more on that later).  Well, I realized that even if I could drive to the grocery store, which I couldn't, due to it being on Myrtle, I wouldn't be able to park anywhere nearby.  With that in mind, I returned home where I traded in the car for the Old Lady Cart. 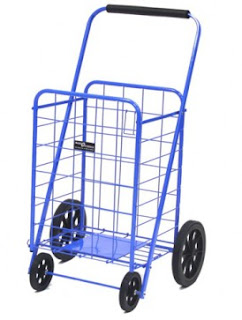 Many of you, no doubt, living in lands only traversed in a car, do not own an Old Lady Cart.  Here, in Brooklyn, it's an indispensable piece of equipment.
While contemplating what items to cut from the shopping list, I set out once more.  Of course, I decided to walk down Myrtle the whole way and see what might be happening at "Move on Myrtle".  In short, not so much.  First of all, the weather today, while not quite nasty, was overcast and threatening rain.  It would have been a perfect day for observing the neighborhood through my front windows.  Also, this is the first year of "Move on Myrtle", and I think they're going for more of a free-form type of experience.  I know they have no interest in attracting the usual assortment of bouncy castles, tube socks salesmen and sausage vendors that make every street fair in the city look pretty much like every other street fair in the city.  I have no problem with this.  Some of the restaurants along the way set out tables (on nicer days), and I expect the event(?) to gain popularity and participants as time goes by.
So, anyway, there weren't an awful lot of people participating in "Move on Myrtle" today -- neither vendors or visitors.  When I had stopped at the roadblock in the car, there had been a marching band playing -- I don't remember what they were playing, but it was something by an 80's hair band!  They were gone when I got back.  In their place, I found a steel-drum band.  Here! I made a short movie of them with my phone!
(Well, I suppose it could have been shorter, since it has no logical beginning or end, and the camera is shaky as hell.  But I never claimed to be an editor or a cinematographer or a screenwriter.  I find excellent locations in which to shoot movies and then step aside to let the other professionals work.  You'll agree, I think, that if I'd received a script asking for a Fish Market between a Nail Salon and a Restaurant for a scene with a Steel Drum Band playing, I would have succeeded beyond the call of duty!)
You'll note that there aren't all that many people out and about.
A couple of blocks later, I came across a block that seems to be set aside for small children.  Here's a bunch of kids trying to Hula-Hoop.  They're cute and I exercised a great deal more self control with regard to how long I kept my finger on the button!
This block wasn't exactly teeming with humanity either. But here's where I suddenly realized something I had been seeing since arriving at "Move on Myrtle" -- or rather something I hadn't been seeing.  Cops!  From the time I arrived at the first roadblock closing down Myrtle Avenue to the time I exited the closed area, five blocks later, I didn't see a single NYPD officer or traffic agent.
I realize that this may not seem like anything particularly momentous, but 5 blocks closed and not one cop?  I'm not complaining, far from it -- it's almost like the city figured we could act like grownups without adult supervision.  Usually, at this type of thing, there are a bunch of cops.  A couple (or more), at each intersection; some others wandering around hither and yon.  There's usually lots of cops!
I realize this may have been a cost-cutting move after the bazillion overtime man-hours the Police must have put in between the 9/11 Ceremonies and the six, (count 'em -- SIX), Pro- and Anti- Burlington Coat Factory Mosque protests yesterday.  And I suppose that even when it gets more popular, "Move on Myrtle" will remain a smaller affair than the majority of Street Events in New York, but, I can't tell you how cool I think it was to walk down that length of Street Fair and find nobody projecting authority.
I have nothing against cops.  I don't get nervous when I see one walking down the street behind me (unless he's got his gun drawn).  I don't break out in a nervous sweat when I walk into a Pizza-by-the-slice place and find a cop waiting at the counter for his order.  I don't feel the need to make sure I'm driving perfectly when I encounter a cop car on the road.
But I find it ineffably cool to walk through a 5-block-long street fair in NYC and see no sign of The Man!  In fact, I found it to be as liberating an experience as when I was in Kindergarten and Mrs. Plotkin** left us alone in the classroom for five minutes -- only this time, I didn't experience any uncontrollable urges to eat paste!
-----------------------------------
*Personally, I think they could have come up with a better name than "Move on Myrtle".  How about "Mosey down Myrtle"?  or, "The Myrtle Mosh"? or, "Mostly Meandering Myrtle"?  They could call it "The Movable Myrtle Mosque" but that would be neither honest nor, probably, the atmosphere they mean to project.  But it would sure as hell draw a crowd!

**For any family reading, yes, I realize that Mrs. Plotkin was my Third Grade teacher.  I can't, for the life of me remember who the teacher was when I was in Kindergarten. But now, if there's any kind of retroactive lawsuit over leaving Kindergarteners to fend for themselves for five minutes (in 1965?), I won't have helped point the finger at the actual culprit.  See?  Names changed to protect the guilty and honor the innocent! (Besides, wasn't there some unfortunate incident when Dad was walking Pepper?)
Posted by Nathan at 5:47 PM