I don't have anything particularly earth shattering to impart today. (The first person who points out that I never do, gets evicted!)

We picked our main location for the movie today, so that's 2 solid weeks worth of our shooting schedule.  Happiness abounds!

I don't know why, but I found myself checking out the IMDB listing for a movie called Commandments that I worked on in the late 90's.  It's one of those movies that could have been pretty terrific, but only if it had hit every note just right. It didn't.

I found a review that Roger Ebert wrote about the movie when it came out and the last line is the most important one:  "This is one strange movie", he wrote.  "It's as if ``When Harry Met Sally'' was directed by Ingmar Bergman."  Now that sounds like a movie I'd want to see! 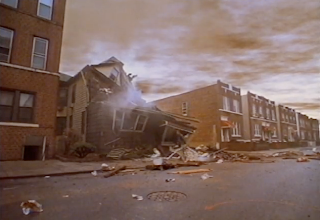 The story involves a tornado wiping out the lead character's house without touching any other buildings, so we got to knock down a house for the movie.  That was fun.  I mean, how often do you get a chance to play Art Director with a massive backhoe?

I was just briefly interrupted by the fire alarms going off in the hotel. It turned out to be nothing, so I'm back in my room, but the alarms are still going off. The front desk folks said it's a malfunction.  If it turns out they're wrong, I'm totally smoking in my room!

And if I had anything else to write about tonight, I've completely forgotten what it was.  Have a lovely rest of the evening!

You lead such an exciting life. I envy you and your fire alarms that work but not the way they're actually supposed to.

It's like Russian roulette, except without a gun and you have no idea how many malfunctions there are for every real fire, so you can't calculate the odds.