I don't want to throw any accusations around, but somebody, (GF, cough, cough), brought home some deadly strain of head cold that has perniciously spread to all of the other humans in the house (uh...me).  As a result, our heads have each swelled up with evil humours fighting to find their way out, but only so that there will be room for more.

This is a rough illustration of how I feel, only a lot less smiley. 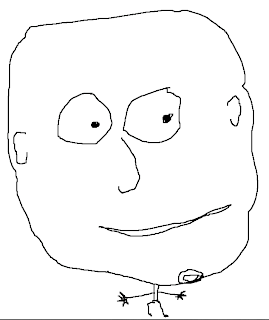 Note: I would have added hair, glasses and a moustache, but GF had enough difficulty figuring out what that thing on my chin is supposed to be.  It's supposed to be a chin!
Now, let's be clear about this;  if my head and GF's head were ever to actually swell up to comprise 90% of our body size and weight, I guarantee we'd both be absolutely freakin' adorable. Like these exemplars of cuteness: 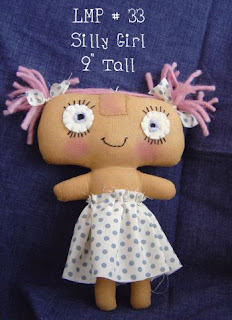 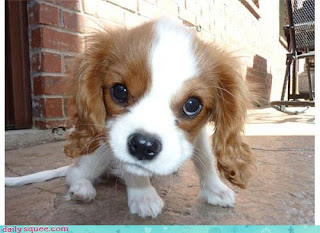 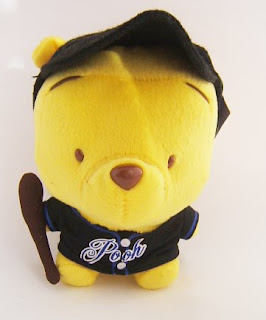 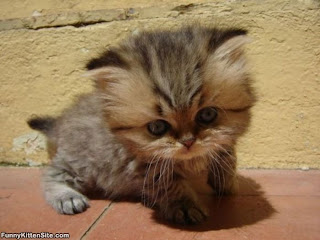 You may all feel free to now indulge your Inner-Awwwwwwwwwww!
The thing is, we don't feel all adorable. We feel like Crrrrrrrrap! ::said with the exaggerated Scottish rrrrolling "rrrrrrr" of Groundskeeper Willie::  It's difficult to stay awake and impossible to stay asleep. (The cats contribute to the latter non-option).  And even though we've got the finest assortment of over-the-counter nostrums, we're not sure what else we should be doing to relieve our symptoms.  Aside, of course from filling copious amounts of Kleenex with things better not described.

I've tried to have us follow the wisdom about that Old Saw about fevers and colds, but it's a crappy old saw.  I don't know about you, but I can never remember precisely how it actually goes.  Feed a cold; Starve a fever sounds exactly as sensible as Starve a cold: Feed a fever.  At least, Lefty loosey; Righty tighty rhymes.  If you mess that one up, it's 'cause you're an imbecile!  If it was Feed a Starve; Cold a Fever, at least it would make some sense.  As it is, we've decided to go with feeding our colds, but that's mostly because we were hungry.  We may be doing irreparable harm.  (And truth, be told, I'm pretty sure I've got a little fever too, but since I don't have the first idea about how to produce targeted feeding and starving, I refuse to use a thermometer and confirm that symptom.)

So...for the moment, we're stuck in the house.  Even if I felt well enough to go jaunting off into the world, I'm sure my big head wouldn't fit through the doorway.

In the meantime, I'm trying to see the upside of things.  Yes, our confinement produces one sure benefit...Home Security!  Neither of us is going anywhere for the moment, so Burglars Beware!  We may not have the strength to get up and chase you around or defeat you in hand-to-hand combat, but we have the aforementioned EVIL HUMOURS and we're not afraid to use them.

While I may be seeing us as adorable big-headed kittens and puppies, you should imagine those seemingly inoffensive creatures that got Dennis Nedry in the end. 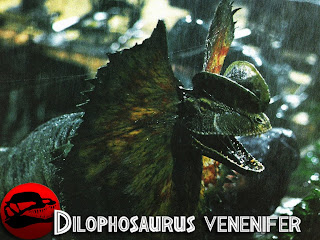 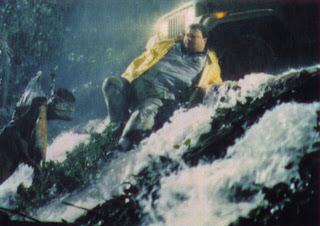 "Want the stick huh huh, go fetch the stick. No wonder you got extinct when I get back in my car I’m gonna run right over you." 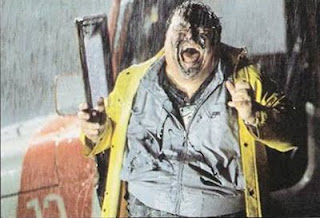 NOTE:  I've discovered that it's somewhat difficult being entertaining while suffering from an assortment of viscous fluids attacking your head from the inside.  I have no idea whether or not I've succeeded.  I am, however, perfectly willing to follow through on my threats of coughing, sneezing and spitting on any intruder silly enough to make an attempt at our worldly goods.  I had considered that a head-butt from my currently massive cranium would make for a daunting threat, but I've never been a big fan of Mutually Assured Destruction as a defense policy.
Posted by Nathan at 2:11 PM

The Mechanicky Gal and I recommend LEECHES. To suck the yuck out of your enormous head an banish the Evil Humours.

Trust us. It works.

There's something going around down here as well, but I was blaming this year's variety of Con Crud for the evil humours that have been inflicted upon me.

Yep, that's me...first time I get a real vacation day off I attend DragonCon and come back to work hacking my head off. My boss may never let me have vacation time again.

Leeches would be disgusted by the stuff coming out of my head right now. And I don't need PETA protesting me, thank you very much!

It's FEED a FEEVER! See how that works? But I keep getting mixed up with if it's "Starve a Cold" or "Stuff a Cold." I never get that right. So I just go with "Eat, bubbula, unless you don't want to." That "bubbula" was my attempt at something a Jewish Mother would say, but since I never had one, I'm going to have to profess ignorance.

Leeches, except for my ex-neighbors the hockey player and his family, sign me up for the anti-leech insurance program, please.