Don't You Just Love The Smell of Magenta? (with an update)

Hmmmmm!  Get a whiff of that color!  What?  You can't smell it?  Oh well; you'll just have to trust me.  As one of the world's leading experts in the field of Chromatic Aromatology, I assure you that Magenta is one of the most pleasingly fragrant of all the colors.  Not at all like the nasty, cloying scent of taupe.

You may be wondering why I'm nattering on about sensations that you are incapable of sensing, and, of course, I'm going to tell you.  But first, allow me to briefly digress.  I've told you before that:

-GF and I like watching cooking shows.
-GF and I have resisted getting cable or Dish TV.
-This limits the number of cooking shows available to us.
-Ergo, whenever we stay in a hotel, we tune the TV to the Food Network and just leave it there.  Whether we pay any attention to it or not. 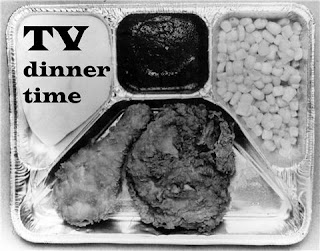 We thrill at the novelty of non-stop TV Chefs chopping, grating, sauteing, braising, baking, poaching, mincing, zesting, stewing, blanching, caramelizing, marinading, deglazing, emulsifying, garnishing and plating.  We like the shows where they demonstrate how to do things.  We like the shows that are competitions.  They're all good. 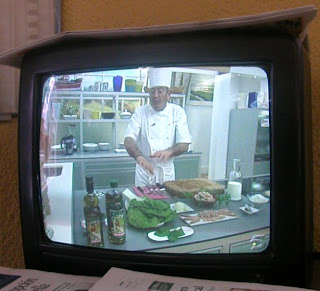 But mostly, we like seeing the finished product and thinking, "Ooooooh, that looks good.  We should try that sometime"...which we promptly forget all about and never follow up on. 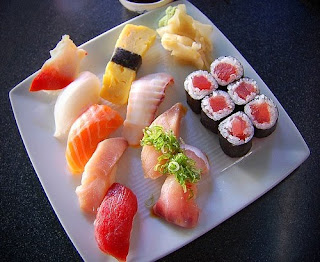 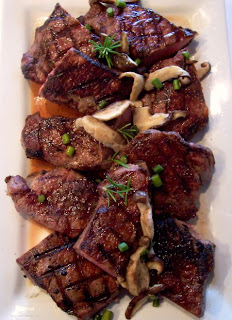 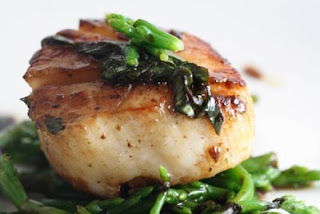 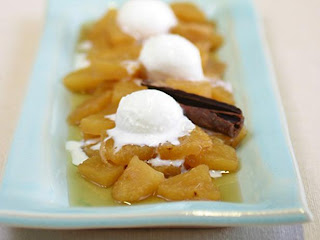 See?  Don't those dishes all look terrific?  My mouth is watering just looking at them! Which leads me to the one horrible and inevitable moment of frustration in every single episode of every single cooking show EVAR...when the chef takes a forkful of that day's creation and makes yummy-yummy noises and then, orgasmicly tells you how wonderful it tastes.  Sorta like me telling you how wonderful magenta smells.

Which makes me feel really stupid for having watched in the first place.  Not that it makes me change the channel before the next one begins.  I mean, think about it -- there are countless hours of Television devoted to the culinary arts, and they all have one thing in common.  They're all completely incapable of demonstrating the two most crucial senses involved in food preparation and consumption  --  smell and taste.

Imagine, if you will, a new show on MTV called -- oh -- let's call it Listen to This Band! O.K., first you'd have to imagine that MTV still did shows about music, but stick with me here.  The format of the show would be that some Music Aficionado goes around finding the best unknown bands in America.  The show would feature footage of the band performing their awesomest bestest stuff and the Host would tell you all about them.  There might be some interview stuff, but it's mostly about the music.  But here's the twist.  The show would never actually use the sound of the band playing...lots of footage of them playing, but instead of hearing the music, the Host would be describing it to you.  "Oh, oh, oh....this is my favorite part.  After the twin drumkits trade riff after riff, the two lead guitars chase each other up 7 octaves in a screaming duet...all building up to the climactic moment when the Sousaphone takes over and brings it all home!  Whooooooaaaaaaaa, is that amazing?!  You wouldn't think it'd work, but it's absolute GENIUS!  Trust me...it's amazing!"

I don't think I'm giving away any secrets if I tell you that commercials for food products and restaurants use Professional Food Stylists to prepare what you see on-camera.  They have all sorts of tricks they've learned over the years to make food look scrumptious.  The food has to give off just the right amount of steam (which gets pumped through tiny little capillary tubes on cue).  There have to be beautiful grill marks (made with overheated wires).  The soda has to fizz just right (maybe with a dash of salt thrown in at the last moment)?  And the ice cream (mashed potatoes?) can't melt under the lights.  Most of the food you see on TV commercials is completely inedible.

I'm not trying to say that I suspect the cooking shows of cheating to that degree, but why should I trust them that the dish really is that good?  If Emeril goes to all the trouble to tape himself preparing some dish, is there really any chance of him tasting it at the end and saying, "Holy Mother of Gawd, that didn't come out how I thought it would!"?  Would Rachel Ray visit Bobby Flay, only to say, "This tastes of ash tray!"?  I'm pretty sure I'll never see Jamie Oliver finish a show by telling his audience that the stereotypes were right all along -- English food tastes all like ass.

Ultimately, even knowing the futility of these shows, I suppose I'll keep on watching anyway.  But I'll also always bear in mind the old adage, "Sometimes you've got to stop and smell the Magenta".

Update 9/9/10:  If you read the comments to this post, you'll see that it didn't take long for them to go completely off the rails.  Gaaaaaaaaaah!   Well, it seems that people are having difficulty figuring out what the point of this whole post was.  Fine.  While I rarely claim to have some grand unifying theme to tidy up my blathering, the point of this one was actually fairly simple:

Food is meant to be smelt and and tasted...two sensations that TV is incapable of communicating.  All of the preparation and aesthetic artistry is merely a lead-up to the act of smelling and tasting.  TV cooking shows, therefore, are a little like books with the final chapter torn out.

Sousaphone? That must be the episode about "Billy and the Boingers."


feabrea - You can't get it at Panera, but it's fantastic. Trust me.

Holy Crap, that's fast Steve. When I hit "Publish", does this stuff beam straight into your brain? I now feel an awesome responsibility. (Not really. Polybloggimous cannot be held responsible from brain damage caused by direct neural uploads.)

Would you prefer if they did NOT eat what they made? Or if they ate it and then gagged and spit the food out on the counter?

Or even if it's a fine example of whatever it is they've made, it doesn't mean I'll like it. Imagine that Jacques Pepin had encountered Stinky Tofu 20 years ago and loved the stuff. He might use words like "aroma" instead of "odor" or "reek". He might say "pungent" instead of "acrid" or "nauseating". He might describe "brining" the tofu instead of "fermenting" it. And if I didn't have friends who enjoy torturing me, I might believe that he was making something worth trying! The Bastard!

There are certainly less extreme examples, but taste is still highly subjective so I'm hesitant to just take their word for it when they say something is delicious.

Although gagging and spitting food on the counter would be entertaining too!

Dude, I don't enjoy torturing you, it's just that the pungent aroma of stinky tofu is sometheing everyone should experiece for themselves at least once.

I knew I'd drive this off the rails with that reference. There was a point being made and even I'm not sure what it was anymore!

A guitar has a four-to-five octave range. Although the description is "chas[ing] each other up 7 octaves in a screaming duet," so I suppose if at least one guitar is starting in an alternate tuning where it's detuned or tuned up, then one guitar could start playing three octaves lower, then the other guitar could join in, then the first guitar drops out. But that description is clearly misleading and so I'm really disinclined to watch Listen to This Band! unless they get a new host who is more qualified to describe what he's listening to.

Do you know where they found that host?

See, that's what I love about Hell's Kitchen - when the combatants...I mean contestents, screw up a dish, Gordon Ramsey has no problem spitting it out and telling them is tastes like BLEEP!

Hey, "Throwdown with Bobby Flay" once featured a mufaletta sandwich that had me craving olive salad for days. When I finally bought the ingredients and made some, I found out that I make a damned good olive salad.

Remind me never to take a hotel room with you, Nathan.

Good point, Nathan. I've wondered what the intent is. That the food was really prepared, or that the cook/chef actually eats what the make?

Perhaps there is a psychological/advertising study that showed that eating the food convinces the viewers to buy the cookbook/DVD/Ginsu knife.

Or maybe Julia Child started doing it and everyone has just followed along for 50 years.

The post has a brief update now to clarify INTENT for all of you troglodytes. (I've heard that insulting your readers is a sure-fire way to guarantee loyalty.)

Well, with stinky tofu, I think you prefer the final chapter torn out, don't you? :D

John, I don't care whether or not the final chapter of "Stinky Tofu" is missing, but I'd prefer that the book was written in Sanskrit. Totally incomprehensible to me without the least chance I'd ever pick it up and open the front cover.

To clarify the clarification, I wasn't questioning your Intent, but the Intent of the cooking show producers/directors/chefs/cooks/etc.

In other words, I agree with you.

I question the intent of your clarification.