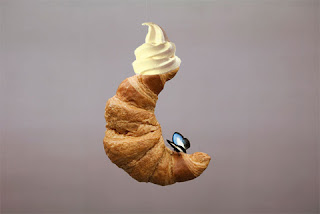 I'm not sure what that picture has to do with anything either, but if you search Google for images of "What does vanilla ice cream taste like?", that's one of the ones that shows up.  I thought it was cute, so, it's what you get.

On to today's post...
Whenever you start work on a movie, you get a "Deal Memo" to sign.  It has a lot of standard clauses specifying that you'll be working exclusively for such-and-such Producer, that everything you buy with Production's money belongs to the Production and you don't get to take it home after the movie; that you consent to showing up in "Behind the scenes" footage and that you won't drink or do drugs at work. (I'm pretty sure they frown on you doing drugs after work too, but I don't remember the specific language in the one I just signed.)  It's also become customary to find a clause specifying that you won't take pictures on set unless your job calls for it and that you won't divulge things about the movie like plot lines or Production nightmares or...oh...where you'll be shooting tomorrow and "C'mon down and get {big actor's name}'s autograph".  The deal memo I just signed doesn't specifically mention blogging, but that's one of the things they have in mind.  As usual, I won't be saying which movie I'm working on and I'll endeavor to keep things fairly generic, but I might talk about some stuff that's going on.
One of the questions I get asked more often than any other in this business, is, "What does it cost to shoot at someone's house"?  And I always say that it would be just as easy to answer the question, "What does vanilla ice cream taste like?"  It's not an easy question to answer and the most accurate response is, "It depends".
It depends on what kind of house you're talking about -- Is it a palatial estate or a run-down shack?  Is it located in the middle of a city?  in a wealthy suburb?  in a rural setting two hours from the nearest signs of civilization?  I'll pay different rates for different types of homes.
It also depends on what kind of movie I'm working on.  This may seem a little unfair -- Sears doesn't adjust their prices to accommodate the income of the various customers who walk in the door.  The tag on that refrigerator doesn't ask how much you have available to spend.  But when it comes to movies, it does matter what the film's budget is.  I may need the exact same home for a One-million dollar movie that I'd need for a 25-million dollar movie.  I may need it for the exact same amount of time.  But I won't spend the same amount on one movie that I'd willingly spend on the other.  That's just the way it is. (The only balancing factor for the homeowner is that the lower budget film will have a crew size that's a fraction of the crew size on the bigger show.  But, ultimately, it's pretty much the same experience for the homeowner.)
Anyway, what gets me started on this subject is that this show has a fairly moderate budget.  I don't have tons of cash to throw around.  On the other hand,  we're not shooting in a major cosmopolitan area, we'll have a small crew, and we don't have any need to shoot at The Taj Mahal or any five-star restaurants.  It should all work out, right?
One of the first things I was told when I came on this show was that our Director was acquainted with a big-name star who owns a large piece of property in the area and that big-name star would be happy to have us shoot there.  It sounded ideal.  And we're not talking about their house -- we're talking about acres of woods!

We spent a day wandering around those many acres of property to see what it had to offer.  There's a private lake, some babbling brooks, some idyllic meadows...all things we need for the movie.  It would also offer the luxury of having plenty of space to park all of our trucks and get them close to the shots.  And we'd be free to make trails from the roadways to the shooting locations so the crew could get to them easily.

Now, you'll note that I said the Director was acquainted with this big-name star, so I had no expectation that we were being invited to shoot there out of altruism and friendship.  I assumed there'd be a fee involved.  I also expected that the fee would reflect big-name star's familiarity with how things work;  That we'd be asked to pay a fee commensurate with the fact that this is a low budget picture and that the location is...woods.

Over the weekend, big-name star's spouse got back to our producer with their asking price.  They want roughly three times what I'd consider paying for that location for a movie this size (and probably six times what the producers were hoping to pay).  Their interpretation of the taste of vanilla ice cream obviously differs from mine.  I'll be looking for an alternate location.  Did I mention that we need to shoot in woods?  And I'm fairly certain there are some other bodies of water around here.  Losing this location is not the end of the world.

On the other hand, when I was hired, I was told they had a line on a healthy number of the major locations for the film -- this being one of them.  So far, each of the other locations they "had a line on" has worked out precisely as well as this one.  The fact that I expected this to be the case from the beginning doesn't make it any easier to be happy about. And nobody's offered me any ice cream at all.  Vanilla or any other damn flavor!
Posted by Nathan at 12:37 AM

Second: "What does it cost to shoot at someone's house?" is also easy. If they're at home and the house is in North Carolina, it's a Class E felony punishable by up to 85 months in prison.

Glad to be of help! Yet again!

Well, you should be able to smoke while you scout out in the woods.

Scout. Woods. There's a joke in that, but I ain't cracking it until I know Nathan is well nicotined up.