Yesterday, I walked into the Dekalb Avenue Subway Station at about 9:00AM on the way to an appointment.  There were a couple of NYPD cops standing in the entry area with a folding table and the usual sign reading, "All backpacks and large packages are subject to random searches".  Like I said, this is usual.  They move these checkpoints around to various subway stations all the time and they actually do seem to be random in their approach.  Actually, I need to take that back -- I'm pretty sure I've never seen them actually searching anyone's bag.  I question the utility of this approach, but, at worst, it seems to be a waste of Police manpower, so...who cares.

But yesterday was different.  In addition to the two NYPD cops, there were three uniformed agents from the Transportation Security Administration.  Really?  TSA agents in the subways?  And they had a couple of hand-held devices sitting on the folding table.  I have no idea what these machines were.  My first thought was that they might be some kind of explosives sniffers.  They may have been Truth-O-Meters for use in questioning suspicious characters.  For all I know, they were raffle ticket dispensers for the TSA Annual Gala Ball.

But I did find it extremely disconcerting seeing TSA agents in the Subway system. I suddenly had the almost unavoidable urge to remove my shoes.  I found myself wondering if I'd be allowed to proceed through the turnstile with my 12 oz. bottle of water.  I suddenly wondered if I had proper I.D. and whether or not my MetroCard would pass muster to establish me as a "ticketed traveler".

Needless to say, neither the cops, nor the TSA agents took any notice of me whatsoever.  In fact, they didn't seem to be paying attention to anyone at all.  I did notice that the two cops were talking to each other while ignoring the TSA agents and vice versa.  It was like a grownup version of the cool kids tables in High School -- except I'm not sure who qualified as cool in this instance.

And, it turns out that this has been going on since at least April and I just never saw it before.  My knee-jerk, visceral reaction is that I don't like it, but, ultimately, I think it's probably more stupid than evil, so I'll ignore it for the moment.  Feel free to convince me otherwise.

I ran across this article yesterday and thought it was pretty cool.  You may or may not be familiar with DonorsChoose.org.  Teachers around the country post wish lists for stuff they'd like for their classrooms or pet projects.  Donors look through the requests and can decide to fund one or more teachers' appeals.  Well, Hilda Yao, executive director of the Claire Giannini Fund decided to fund every Teacher in California's projects in one fell swoop.  To the tune of 1.3 million dollars.  And threw in another $100,000 for other teacher's requests for good measure.

I've mentioned how "shopping" for stuff to read on my nook™ is a new experience that I'm still getting used to.  I don't especially like how B&N arranges the stuff on its website for browsing.  They make it a little difficult to get past the stuff they're pushing to find the stuff I might want. I can't really blame them, but I still prefer wandering through shelves and looking at whatever catches my eye.  Yeah, yeah -- I know -- the way the arrange the shelves is just as much a form of manipulation, but it's one that I'm accustomed to.  Using the website is still a more frustrating experience for me.

Anyway, a couple of nights ago, I had finished my most recent reads on paper* and decided to see what B&N had to offer on a whim. I ran across A Columbus of Space by Garrett Putman Serviss.  This book is part of Google's effort to digitize everything ever committed to paper, and like a lot of these things, it's free!  So, I figured, what the hell -- Science Fiction published in 1911 ought to be good for a hoot at the very least.

The book turns out to be about some guy who discovers the secrets of atomic power and builds himself a space ship.  He kidnaps a few people from his Gentlemen's Club (which meant something different in 1911), and takes them off on a journey to Venus.  I couldn't finish the book.  It...uh...sucks.

I'm not talking about quaint ideas and imaginings from 100 years ago .... I figured those might be fun.  I have no problem with the breathable atmosphere on Venus in his book.  I'm not bothered by the fact that he imagines wearing a fur coat will protect his characters on the shaded side of Venus.  I don't mind the gorilla-like creatures with whom he populates the planet (although once his protagonist learns to communicate with them, I might have liked to hear what they had to say on occasion). I don't suppose I'm even too put off by the fact that the prejudices of the writer's time come through front and center.  The "aliens" (or "natives"?) are treated more like an isolated tribe found in the Amazon Rain Forest than an entirely new species on another planet.  When the Earthlings shoot one of the first aliens they encounter and then, accidentally kill a few more of them while using them as Sherpas, their attitude is "Oh well, there's more where they came from". I did find it entertaining to see how the author dealt with the problem of explaining atomic power. Each time it came up, he'd have his narrator tell his audience that "they'd be bored by the details", or that "they wouldn't understand".

I could have dealt with any or all of those problems.  They probably make for a fairly accurate portrayal of attitudes in 1911.  What I couldn't deal with was the writing style.  Once you decipher the vernacular of the time, you're left with the equivalent of a Third-Grader's report on what his family did during the summer.  And then we got on the spaceship and went to Venus.  And when we landed, something broke, but that's not important and we won't bother talking about it again.  Then the gorilla-people came and Joey shot one of them, but that was OK, 'cause the other gorilla-people decided to behave themselves and they helped us go to the other side of the planet, but some of them died and then some other stuff happened.  THE END.

Actually, I gave up long before the end.  If you're curious, his works are easily found online.

I may have more randomness later.  We'll just see, won't we?

I had an MRI yesterday.  When I made the appointment, I was asked if I was claustrophobic.  When discussing it with relatives, I was coached on the wonders of Valium.  I was warned about how hard it is to keep still for such an extended period of time.  In short...all of the warnings about what might freak me out had me freaking out before I got there. 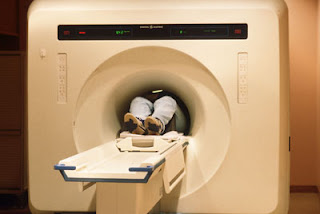 Well...nothing about it freaked me out except the expectations.  In fact, the technician had to keep waking me up so I'd hold my breath on command. It was the most relaxing 1/2-hour I've had in ages! I'm thinking of buying a replica (complete with clunky sound effects), for lulling me to sleep when insomnia strikes.  Or maybe I'll just try sleeping in a partially disassembled hot water heater.  That's about the right size and shape.

I donate to them all the time, and I think they're the cat's pyjamas. This month I bought books for kids in Florida. Knowing my luck they'll all get destroyed by an incoming hurricane...

I'd never heard of them until Janiece pointed them out on Facebook, and now I've donated and added them to my regular donation list.

That's pretty awesome that Yao would do that.