It's Been How Long Since I Posted?

I guess I must be pretty busy.  I'm sure this is the longest I've ever gone without posting anything since I started this blog.  Bad Blogger!

Before I bring you up to date, I just want to assure you all that I'm really having a pretty good time here.  I like the people I'm working with.  The job is fine.  I'm not suffering any major catastrophes and I'm generally happy.  Having said that, "bringing you up to date" is going to, mostly consist of ranting and bitching and moaning.  Hey!  I like ranting and bitching and moaning.  It's fun!

Before I came up here, I picked up a rental car in Brooklyn (on the company's account, natch).  About 1/2 way to my destination, the dashboard started flashing a warning at me that the airbag needed servicing.  The next time I started the car, it added some other warnings about changing the oil and "low fuel", even though I had just filled up the car.  I didn't really trust the warnings, but even if they weren't true, it was annoying, so I traded the car in for another one.

The second car waited 2 days to start telling me that I had "low tire pressure" in the right front tire. By flipping through the various "info" screens available, eventually, you get one that tells you (supposedly) what the tire pressure is in each tire.  According the to car's computer, I had

This seemed a bit distressing to me.  I decided to stop at a gas station to check the air.  As I'm sure you know, this is easier said than done.  Gas stations have free air, or they have air that costs $1.00 for 2-3 minutes.  If you're lucky, they have a built in pressure gauge somewhere on the machine.  There is never a separate pressure gauge available to use for independent confirmation.  (Many of these "service stations" -- read Kwikky Marts -- will happily sell you a pressure gauge, but I kinda resist that when I'm already paying for the air.)  In short, I just don't trust the built in pressure gauges.

I went a couple of days ignoring the warnings, expecting to eventually pass an old style gas station with people who actually know something about cars and have the tools available to, uh, check something as complicated as tires.  But in the meantime, the dashboard warnings had grown more strident.  Every time I turned on the car, a massive strobe show straight out of Saturday Night Fever would begin and the Bee Gees would blare out some new song about the dangers of over- and under-inflated tires.  (You may think I'm making this up, but I swear, those Chevy's do their damndest to get your attention.)  So, I caved in and used one of the $1.00 for 2-3 minutes machines.

Guess what,  $1.00 buys you exactly enough time to fill three tires.  You need to pay another $1.00 to fill the fourth.  And the built in pressure gauge seemed as reliable as I expected it to be.  No matter how long I pumped air, the gauge never got above 27 PSI.  The tires looked awfully full, but the gauge said the needed more air.  I hung my head in shame and asked my smart phone to direct me to an actual tire store.

Having grown up in the 60's and 70's, I can't begin to impart to you the sense of incompetence one feels at having to stop at a specialty store for something as simple as putting air in a car's tires.  And, trust me, no matter how you try to explain your predicament, the guy behind the counter will look at you the same way one looks at a dyslexic chimp after the twentieth attempt at explaining "Lefty-Loosey, Righty-Tighty".  Then, it gets worse!  Mr. Helpful Tire Salesman (who knows I'm not about to actually buy anything), checks the tires and finds that the tires, which are each intended to hold 32 PSI, are inflated to a range of between 48 and 81PSI!  Now, he knows that I'm not only retarded, I'm suicidal, too!

I now have tires that promise to roll properly without exploding if I hit a pothole.  Whew!

That part of bringing you up to date took a lot longer than I expected, so I'll just hit the high points on the rest.

We've pushed the start of Principle Photography by two days. That means we're starting two days later than planned.  I've always assumed that if you decided to start earlier, that'd be called pulling the start of Production, but since I've never heard of that ever happening, I'll just have to keep on assuming.  No, what happens, (and is happening in our case), is that they tack on a "Pre-Production" shoot day.  Somehow or other, it doesn't really count, even though everybody involved has to be just as ready as if it were the actual first day of production.

We keep altering our shooting schedule -- this is not in the least unexpected; it happens all the time.  However, every time I get to the point where I've got all of the locations lined up for the first couple of weeks of shooting, they decide to shoot something during the first three days that we haven't found yet.  Pardon me, but my only reaction to that is, "Fuck"!


I finally got moved to a room with a balcony so I can just step out a door from my room to smoke.  Before I leave, I plan to get a picture of me in my underwear, out smoking on my balcony, just to leave for the jerk who was working the front desk when I checked in.  The room, itself, isn't as good as my previous room, but I'm not going to bitch about it since I made such a big deal out of getting the balcony in the first place.  But just between you, me, and anyone else on the internet who shows up here...this room sucks.  There's two queen beds instead of one king...which means there's a bunch of floor space wasted on something I'll never use and the bed sits so close to the desk that you can't pull the chair out far enough to actually use it.  The shower has two settings:  Off, and Holy shit, that's hot!  But, more than that, I'd like you to see the wonderful workmanship that was applied at some point in the past to repair a leak in the ceiling. 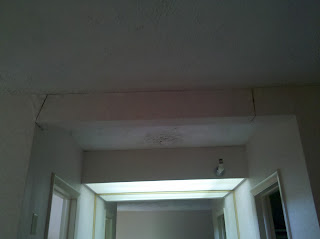 What you're looking at, is the ceiling that leads into where the sink and counter sits as a lovely little separate area from the actual bathroom. 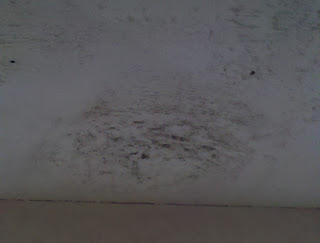 If you look closely, you can see a couple of little holes in the ceiling, which lead me to believe that the first attempt at fixing the leak consisted of nailing up something over the leak.  When that didn't work, they must have found and stopped the leak somehow and then just plastered over it while it was still wet (and possibly moldy?). 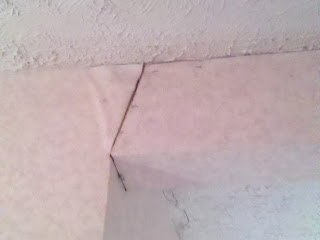 My favorite part is that they must have had to go up into this little bit of ceiling detail (maybe there's a pipe hidden in here?) so they had to cut away the wallpaper to get at it.  And then, they stapled it back together.

I love this place!

I have a couple more things to talk about, but this is long enough and I've got some actual work to do today, so I'll add some stuff later.  Have a Happy Sunday!
Posted by Nathan at 11:49 AM