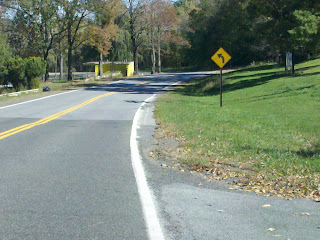 I drive by this sign every night (in the dark) on my way back to our hotel.  It may not be entirely clear from the photo, but this sign indicating that the road runs left...is placed squarely at the beginning of a fairly sharp curve to the right.  Oh well.

If you're going the other direction, you're passing through a section of road where the State Highway speed of 55 MPH is superseded for about a mile by signs slowing you down to 40.  A few hundred yards behind me in the shot you're seeing, you come upon a sign warning you that you're approaching a stop sign.  Shortly thereafter, you encounter a sign telling you that you've reached the end of the 40 mph speed restriction -- so you stomp on the gas pedal to get back up to 55 (or 60 or 65), and as you go around a blind curve to the right, that stop sign you forgot about shows up.  Damn!

The other thing I like about this is that after you've slammed on the brakes for the stop sign you forgot would be appearing is that once you've stopped, you have a choice of going straight or turning right.  Regardless of which way you go, there's a 35mph sign staring you in the face.  I'm pretty sure the guy who put of the "End of 40mph Limit" sign was just getting his jollies.

One other thing that always surprises me about life in rural areas is how many people think nothing of walking for miles to get stuff done.  (Yeah, I know; they probably don't have any choice, but it still amazes me.)  This morning I left the hotel around 10:00am to run some errands and get a late breakfast. Remember, there's no food available at the hotel and the nearest option for breakfast is about 3 miles away unless you decide to knock on the door of some random stranger who lives closer than the Diner.

Anyway, as I turned onto Rte. 44, I saw a woman walking west on the shoulder of the road.  I went ahead and dropped off my laundry and stopped by the Post Office. (Not for nothing, but Jim should consider moving to Kerhonkson...the Post Office here seems to be a model of efficiency and pleasant customer service...just sayin').  Then, as I'm driving back along Rt. 209, I see this same lady again...a few miles from where I'd seen her before.  Nothing extraordinary about this... she didn't seem to be walking particularly fast, but I did think she'd made the distance in pretty good time.

What actually made me think twice about this was that three and 1/2 hours later I went back to pick up my laundry*.  The place I'm using is about 8 miles away.  And who do I see walking along the highway here?  That same lady, carrying a big bag of groceries and headed back in the opposite direction.  I'm sure it was the same lady because she was dressed in a fairly distinctive outfit.  In hindsight, I'm a little ashamed I didn't stop and offer her a ride, but at the time, I'll admit that the thought never occurred to me.  People from Brooklyn just aren't in the habit of pulling over and offering random strangers rides.


I'm sure the word "sad" would be involved, but I'm having trouble deciding all the things I think about the fact that some woman has to devote more than 4 hours of her Saturday to getting a single bag of groceries.**

**I also realize I'm making some pretty big assumptions here.  Lots of people do go out for hours-long walks just because they feel like it. My sister and her husband are on a quest to hike every trail in the state that rises above 3500'.  I prefer elevators.