I know I've been obsessing about traffic signs here, but there's one more that's been getting to me.  There's this spot when you're crossing Ashokan Reservoir that you encounter a sign that says "End of 25mph Limit".  Every time I pass this sign -- doing 45 or so -- I find myself wondering again where the hell I was supposed to have slowed down.

A couple of days ago, one of the Teamsters pointed out to me that someone had hit the mailbox for the house we're shooting at and it was leaning over.  The house isn't so much a house as a museum, so I blithely commented that they shouldn't be getting all that much mail anyway. 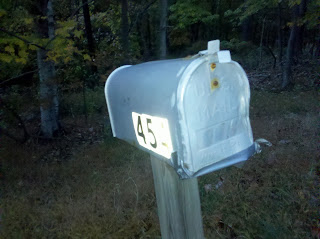 To prove my point, I walked over and opened it up to see what there might be inside.  Behold...three pieces of old moldy mail covered by a dusty cobweb and a wasps nest...luckily filled with cold, sleepy wasps! 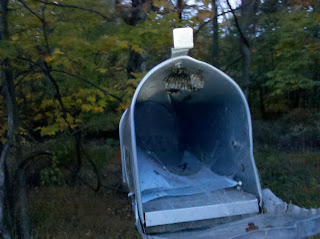 And since I don't have time to post a whole hell of a lot more right now, here's a couple of pictures taken from the back of our office looking North toward Woodstock.  It was bright sunshine where I was sitting and there was a big storm headed toward me.  It pissed rain on me about ten minutes later. 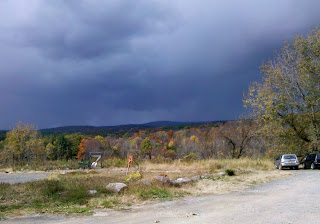 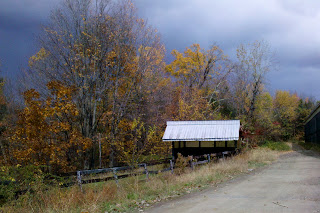 Oooh, ooooh, ooooh!  I almost forgot to mention...Yesterday we had miniature goats in a scene.  I didn't get around to taking any pictures, so you'll just have to imagine them.  They're just exactly like goats...only smaller and cuter! (But every bit as cantankerous.)
Now that we'll be spending a few days in the same location, I'm going to try to be a better blogger for the immediate future.  We'll see how that works out.
Posted by Nathan at 8:18 AM

Did AGF put your "special" item in the fridge?

I haven't been home in weeks and won't be for at least one more. Is there a nasty and perishable package I need to be warning GF about?

I thought he was talking about the wasps.

Because they would be better than anything JTS might send you. Seriously.

Jim, you're just jealous because I didn't send you any booze-filled candy. Your package was the best survival suppiles (admittedly limited) money could buy.

Nathan - yes. I put a sign on the top of the box tellingher to open immediately and refigerate. She will have eaten all the boozy candy by the time you get home, but the other thing you sent me to buy in the wilds of Scandanavia? It'll be waiting right there for you. :D

The problem is that if we're not home, we just get a slip saying there's a package waiting at the Post Office. And then, GF could show up with a notarized affidavit from me, including all of her I.D. with the same address and apartment number and they'll still refuse to give her the package.

I fear you'll see the package again before I'm back in Brooklyn and get a chance to pick it up myself.