Congratulate Me. I've Achieved A State of Consummate Nescience!

With very little effort, over the last few weeks, I've failed to listen to any news on the radio.  I haven't watched the news on any local, national, international, broadcast, or cable outlet.  I haven't read a newspaper -- neither printed nor electronically distributed.  This morning, for the first time in weeks, I made a cursory effort to look at some of the news sites I have bookmarked...and guess what.  Not only did I discover that I have absolutely no idea what's going on in the world; I have little or no interest.  I know I'll get back to being mildly obsessed with the news in a few more weeks when I'm done with this movie, but, until then, I'll happily continue in my ignorance.

Let me tell you what I do know about right now.  One of our Locations (scripted as "Int./Ext. Carver House") takes up two full weeks of our shooting schedule.  We're shooting at a really fantastic house in Woodstock called "White Pines".  It's a beautiful example of Arts & Crafts Architecture, built by the founder of the Byrdcliffe Arts Colony, Ralph Radcliffe Whitehead for he and his wife Jane.  The house was completed in 1902 and now serves as a museum for the colony.  Over the years, some of the homes on the property have been sold, but many remain part of the colony and various sculptors, musicians, painters, weavers, potters and photographers continue to spend time there.

For some shots of the house before we took up residence, you can look at the file on my scouting site.
The shots of the room with all of the pottery on the floor and chemicals on the shelves show Jane's storage room as she left it when she died in the 20's.  Lots of poisons there!  She's also said to haunt the house and to form very definite opinions about the people who visit.  During the 80's the Guild hired someone to come in and appraise the house and it's contents.  More recently, a seance was held and the participants swear Jane made an appearance.  They claim she immediately said, "Is that annoying man still here counting my things?  I don't like him."  As far as I know, she hasn't shown up while we've been there.

Here are some shots with all of the crap that a movie brings with it. (And pictures of the miniature goats I missed the other day!) 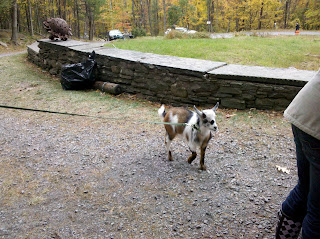 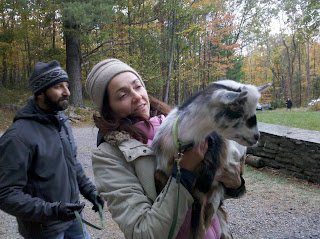 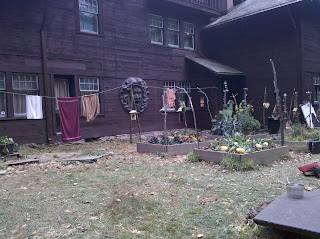 The garden was created by our Greens Dept. They're in planter boxes and will disappear when we do. 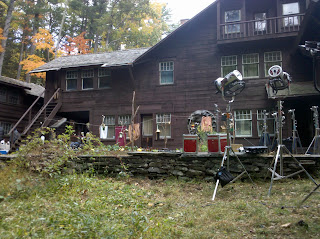 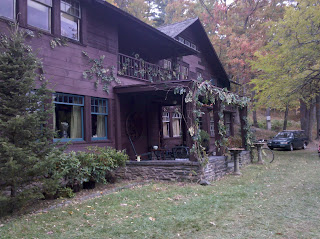 And Set Dressers put the vines all over the outside of the house. 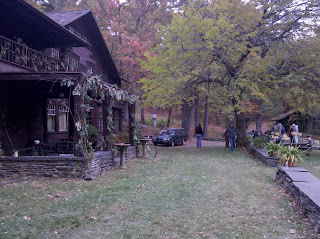 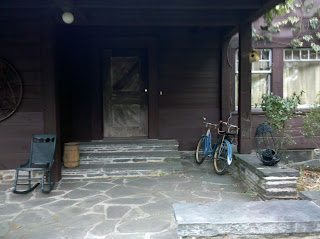 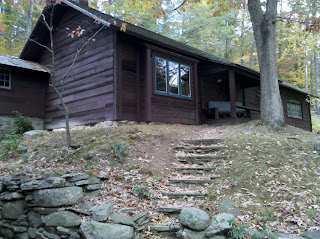 This is the loom room, which we've converted into a painter's studio. 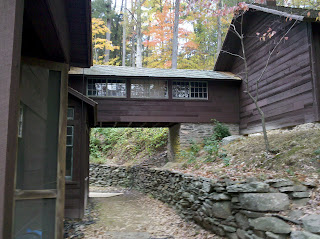 And the bridge that joins it to the main house. 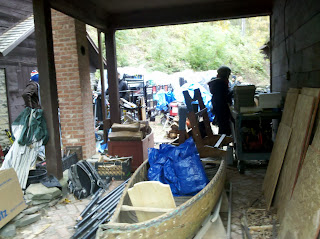 And all of our crap hiding behind the house while they shoot out front!
Posted by Nathan at 8:41 PM