Random Thoughts on Trick or Treating.

When I was a kid, most of us had costumes that Mom threw together out of stuff we had in the house.  Me being a cowboy didn't call for any real shopping on Mom's part.  Sometimes, there was some sewing involved, or whatever, but I don't recall ever having (or wanting) a costume that came from the store.

Trick or Treating consisted of going to every door on our block (with Mom or Dad along), and ringing the bell to demand candy.  I'm sure there had to be a code the parents knew telling them which doors to leave alone, but I was little and I never knew about it.  And, for older kids (those mostly into the "tricking" part), I'm sure the code was just as useful -- just in an unintended fashion.

Personally, the only doors I wanted to avoid were the ones where someone's Mom was really in the spirit of the holiday.  I didn't care how good the treats might be.  I was completely creeped out by the thought of somebody's mother dressed and made-up to the nines with blood dripping from the corners of her mouth.

I don't have any distinct memory of when I decided trick or treating was for babies, but I suspect it was around the age of 12.  At least I hope it was.

Costumes, of course, make a comeback around the time you're in college.  Costume parties can be fun!  And when you're a little older, you get to take things too far.  I'll never forget the kid from my Freshman year in college who came dressed as Jackie Kennedy...immediately after leaving Parkland Hospital.  It was...colorful. 'Nuf said.

If any of the above make it sound like I've got a prejudice against "store-bought" costumes, nothing could be further from the truth.  All I ask is that there's a little imagination or effort or both involved.

This is a fine costume: 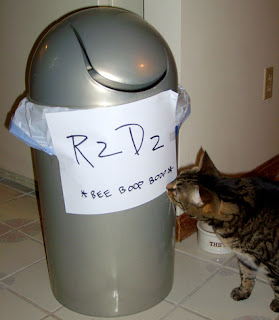 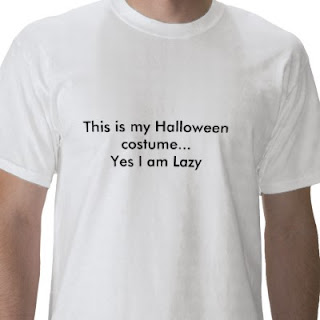 I don't know if things have changed for kids who grow up in cities since I never lived in the middle of one before I was 18.  Trick or Treating in cities seems a little pathetic.  When I was in Boston, in the Back Bay, I realized there was a tradition of throwing the kids into the car and heading to gentrified (read rich) neighborhoods so the kids could make a good haul.  I saw the same thing when I lived in Brooklyn Heights.

I've never seen it in action, but I'm told that kids who live in big apartment buildings just ride the elevators from floor to floor and ring any doorbell where there are decorations.

Since moving to Ft. Greene, I've noticed that kids mostly don't go to houses.  They go to the stores that are still open up on Myrtle Avenue.  We tried sitting out on our front porch one year with a bowl of candy to encourage trick or treaters who walked by, but I think we just scared their parents.
Posted by Nathan at 2:49 PM

I took my 3.5 year old grandson around the block last night. His mother made his pirate costume from stuff around the house.

I was surprised and nonplussed by the number of houses that were decorated and the number of adults dressed in costumes. When I was growing up I never, ever saw a grownup in costume. The only decorations were an obligatory pumpkin with a candle inside. I long for the old days.

One house had live people standing perfectly still, dressed as monsters, very creative. When older kids came by they'd come to life and scare the shit out of them. This is a good thing and may account for the small number of teenagers coming to my house last night.

We live in nice neighbourhood and in years past there would be a lot of kids driven in by their parents. Not so many this year, a few, but not many. Another good trend.