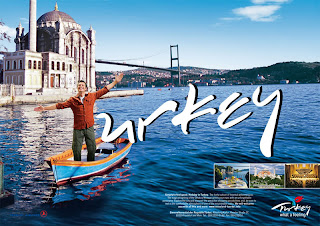 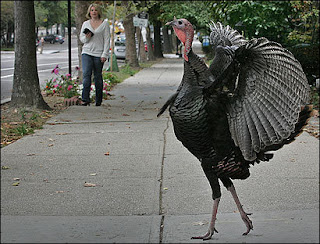 I went to buy a turkey today.  GF and I are cooking just for ourselves this year, so we don't want anything too massive.  I figured a 12lb. bird was about right for Thanksgiving and leftovers we'd actually get through before they went to waste.
I decided this year I wanted to get a "natural" bird.  I'm using the term natural on purpose here. On the one hand, I don't give a crap about "free range" or "organic"---sorry, it's just not that important to me.  On the other hand, I've decided that most factory farmed birds don't taste all that great.  That, and they're all bred to have massive breasts and teeny-tiny little mutant legs.  I happen to like legs and thighs and wings.  And as little as I care about "free-range", I do prefer to know my dinner was capable of standing up during its lifetime.
See this guy? 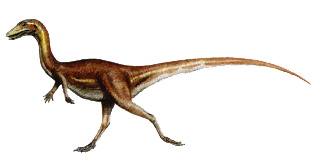 If he'd had some regular arms instead of those little thalidomide thingies, he'd have tasted better.  And if he'd tasted better, somebody would have cared enough to see that he survived the ice age.
I rest my case.
So, anyway...I stopped off at one of the two newer markets in my neighborhood.  They've got a butcher who gets real sides of beef and actually butches the meat. (I know that may be the wrong word, but it worked fine in my head.)  They didn't seem to have any turkeys, though. I would have asked, but, frankly, the place was full people who would have been wearing Birkenstocks if it was a little warmer and they were giving me the heebie-jeebies, so I skedaddled.
Then, I went to the other new market.  This one is kind of a hike and I've never been there before.  In a back corner of the store, I found four turkeys.  All were the same brand.  Two of them said they were Organic and two said they were Free Range.  The descriptions of their virtues were identical. Both mentioned in large print that they had no hormones and both mentioned in tiny print that the federal government prohibits the use of hormones in turkeys.  Neither bothered to mention that they were free of glass shards.
I stood there trying to figure out what the difference was.  I called GF.  She asked me what the price per pound was.  Now, honestly, I could look at the price per pound, but since I buy turkey so rarely, it wasn't going to mean that much to me.  I skipped right to the total price. Sixty-Seven friggin dollars for a 13 pound turkey.  Price per pound, I may not know, but even I recognize that SIXTY-SEVEN dollars for a 13 pound turkey is an awful lot.
It's not like it was Kobe Turkey or something...fed on a strict diet of orchids, saffron rice and candy corn. With daily beer massages.  And a math tutor.  Sorry, I just can't imagine the 13 pound turkey I'd pay Sixty-Seven dollars for!
I ended up going to the Associated and buying a Butterball.  For $26.00.  I have no idea what its walking capabilities used to be, but wrapped up in that plastic, it ain't going anywhere anytime soon.
Maybe I'll get a live one and raise it in the backyard for next year.  I'm not sure I'd have the heart to kill it, but it'd be fun watching the cats freak out about it.  I might even feed it candy corn.
Posted by Nathan at 5:48 PM

I'm a dark meat person myself, so yeah, legs, thighs and wings are all the best parts.

I have turkeys in my back yard. 25 of them this morning. Want one?

Why do I have the feeling that if I said, "Yes", you'd go out in the yard and blast it with a howitzer? Just what I want for Thanksgiving...feathers that smell like cordite!

I had a dozen in my back yard a couple of hours ago, along with several deer.

I get a few hens wandering through from time to time. I haven't seen a tom for a few years now. I know he's around (the hens have little ones).

But if you really want a "natural" one, you may have to go to a hunter's processing place and see if they have any (probably not, but they may know someone who can provide depending on the hunting licenses in NY/NJ/CT).

Me, I'm a white meat affectionado. You just need to know how to bake the beasties to get good taste. (skin rubs, beer can inside, etc)

But, you know, it all takes like chicken anyways.