Ned Was Destined To, Once Again, Experience The Bitter Disappointment Of Failure.

Note:  This post would be a lot better if I had only stopped the car, gotten out, and taken a few pictures.  On the other hand, I have the utmost faith in all of your imaginations.

Or, for those of you less creatively inclined, here's a picture I totally stole from the Internet.  It's only tangentially relevant, but then again, so are most of my posts. 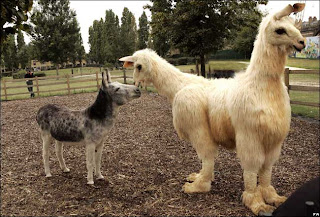 Earlier today, I was driving into Woodstock along Rt. 212 -- a drive I've made way too many times lately, and I noticed something I'd totally missed on all of my previous trips back and forth. And to be fair, I'd estimate that 85% of those trips have been before sunrise or after sunset.

At any rate, as you come around a bend in the road shortly before getting to Woodstock, you pass a particular farm with a slightly odd menagerie.  This farm is not Noah's Ark recreated.  Ya'see...there's ONE of a lot of things.  One cow.  One horse.  One goat.  One Llama (yes...a llama..I know what they look like from the 1967 version of Dr. Doolittle -- but this one had a head at only one end). There were a few other things in their solitary one-ness, but I was doing 60 at the time (in a 45mph zone, thank you very much), and failed to properly catalog all of them.

There were also ducks (in multiples), but I imagine they're free to come and go and the farmer has no power over them.

The thing that immediately sprang to my warped little mind is that the farmer -- whose name, I'm sure, is Ned -- had purchased the finest breeding stock that money could buy, but was lacking in some basics of animal husbandry.  Or possibly, he was making an attempt at some bizarre hybrids -- with a similar lack of background in his chosen subject.

On another topic, I've got two more shoot days, then a few days of wrap, and then HOME!

I'll have you know you would have felt right at home in my work neighborhood last weekend. The street out of the train station that runs by the Arts Center was clogged with trucks, fixtures, lights, you name...took up several blocks of right-of-way and traffic was down to 1 lane. Sure enough, one of the trucks I passed said "Daily's" on the side.

Yup, sure signs of a movie in production nearby. I'll have to check my pics to find the name again.

But you would have felt right at home!

I feel more at home after I leave the trucks behind...but I take your meaning.