I don't know what time it'll be when I get around to hitting the "Publish" button on this post, but it's 5:47 a.m. as I start writing it.

We shot some driving shots and a stunt overnight on a really dark country road near Woodstock last night.  I mentioned that I've been working days while the rest of my department works the shooting crew's hours.  So I was with the rigging crew for much of the day yesterday getting this location set up for the night shoot.  We had a couple of big lifts for lighting and three generators spread out along the road for those units and for the rest of the lighting all over the place.

I went back to the hotel around 9 last night and I came back at 5:15 to wrap the location.  My guys were the last to leave about ten minutes ago.  And now I'm waiting.

I'm waiting for the sun to come up in a 1/2 hour or 45 minutes.  Or when it gets around to it.  I'm waiting for the rigging crew to get here at 8:00 a.m. to wrap the buttload of equipment that's spread out over 1/2 a mile of road.  I suppose I'm also waiting for daylight to show me how much other crap is neatly distributed randomly strewn about the landscape. While I'm waiting, I'm sitting in my car with the flashers on so nobody inadvertently drives into the 135' lift that doesn't really fit off the side of the road. It's just sitting here being big and in the way.  I think the company that owns it is coming to pick it up around ten.  The big-ass generator we rented to power the 100k sunlight is another story.  Yup, I said ONE-HUNDRED THOUSAND watts.  When it gets light enough, I'll take a picture of it for you.


And now, thanks to the miracle of time-travel, I'm including those pictures I promised you almost 45 minutes ago when I typed the words you just finished reading. 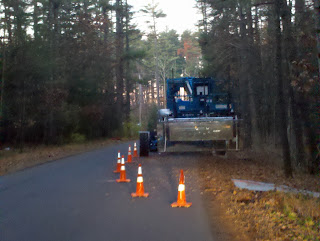 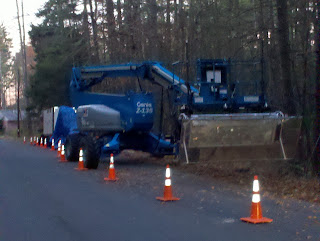 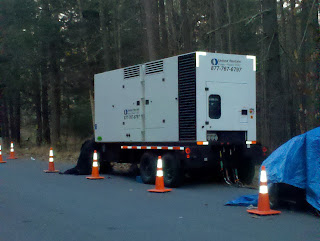 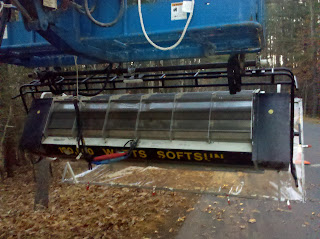 And now...back to the present...or the past...or whatever.
Anyway, to power that monster, you need a dedicated 480 volt generator. And that's big too.  The trailer it's built on has three axles and the weight of it makes all six tires look like half-squished doughnuts.  When it has all six tires on it.  See...yesterday, when they went to move to this location from the previous night's location, it made it about 30 yards before the lug nuts sheared off of one wheel and the wheel went merrily rolling off into a field.  The generator settled at a jaunty angle on its remaining five wheels and made it clear that it did not wish to make its scheduled 12 mile journey.

So, our Teamster Captain magicked up a flatbed tractor-trailer to get it here.  And here it sits. And here, it will continue to sit until sometime Monday morning when the company that owns it can get their own big-ass flatbed trailer here to move their big-ass six five-wheel generator back to Connecticut.

It occurs to me that this post may be somewhat lacking in coherence.  But I'm tired.  And I'm bored...did I mention I'm pretty much serving the purpose of a lighted traffic-cone at the moment?  But since I'm bored and I have nothing else to do for the next hour or so, I figured I'd talk to you guys.  And, frankly, I'm kinda marveling at the fact that I can sit here in my car typing messages and take pictures with my phone and then...sitting in the middle of nowhere, I can post it all onto the InterWeb!  Living in the future is pretty cool.

Now, if I could only get the replicator in my car to spit out another cup of coffee I'd be perfectly content.