On the one hand, I should be a man of integrity and exercise a personal boycott of Donald Trump's; The Celebrity Apprentice.  I've seen the show a couple of times when there was nothing else on, but I can't say I was ever really a fan.  And, of course, now, I'm fairly sour on All Things Trump.  Seems like an easy futile gesture to avoid the damned show, right?

I absolutely loathe Star Jones.  I can't embed the video, but please go have a look at the promo for Sunday night's episode.  I don't really know who the hell Nene is, but I'm now her biggest fan just from what she says in the promo. (If NBC is leading me on and this ends up all warm and fuzzy, I'm gonna be pissed.)

Since I can't embed the video, here's a picture of Jones helpfully whispering something into Marlee Matlin's ear...deafness be damned. 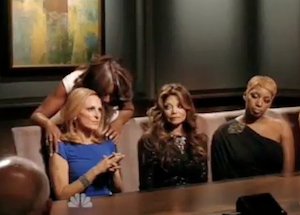