Wrap gifts (and wrap parties) have become such commonalities that not only do crews feel entitled to them, they feel obliged to rate them and find some wanting.  Some complain about merely getting a t-shirt and a ball cap instead of a jacket.  Some complain that the wrap party only includes free beer and wine and, heaven-forfend, they'll have to pay for drinks if they want the hard stuff.

I've got to admit I find this incredibly tacky.  If you work on movies, you are not, some guy who gets a year-end bonus based on your job performance.  You're not a doorman at a luxury building who can reasonably expect a healthy Christmas tip from the wealthy residents you've been catering to all year.

A wrap gift (and  wrap parties) are demonstrations of generosity intended to thank you for your good work (whether your work was particularly good or not, since everybody tends to get the same thing).  It's not as if you weren't already paid for showing up and doing your job every day.  And, frankly, in today's economy, it might be appropriate for some employees to be giving their bosses a gift to thank them for providing employment in the first place.

Anyway, wrap gifts tend to be reserved for those who were significantly involved in a project -- people who worked most of the show, any of the actors, people who contributed something unique.  When a show does a couple of days shooting in New York, I don't really expect to get any kind of wrap gift -- and I'm rarely disappointed in that expectation.

Which brings me to yesterday.  Yesterday afternoon, I went to answer the doorbell and found the UPS guy there with a package for me!  Since I hadn't ordered anything, my curiosity meter pegged at Eleven.  The return address was a wine shop in L.A.  The box itself carried no clues since it was from some kind of hosiery store; obviously repurposed.  Inside the box was a lovely bottle of wine, nicely gift wrapped.

Otherwise, there was only a bunch of packing peanuts -- no note!  I ended up calling the wine shop on the shipping label and they were quickly able to tell me who my benefactor was -- the Writer and Executive Producer for the TV Pilot I just worked on.

Now, I knew the Director and Producers were happy with the way the N.Y. shoot went, but there are all kinds of reasons I'm shocked that anyone would do anything more than saying "thank you". (Actually, saying "thank you" isn't a default action these days, so the fact that they had already done that at the end of the shoot had felt really good already.)  The fact is -- this was one day of shooting out of the 10 days total they shot.  And, frankly, for a one-day shoot, it would be normal for me to get somewhere between 5 and 10 days to find and prep the locations.  I got almost 6 straight weeks of work out of this show.

To say I'd already been generously compensated would be an understatement. 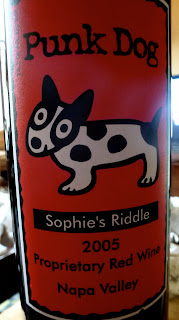 And we both are lovin' our doggies today.