It would appear that I've developed the bad habit of telling you about books I'm reading before I finish them.  Well, just because it may be a bad habit doesn't mean I'm about to stop. 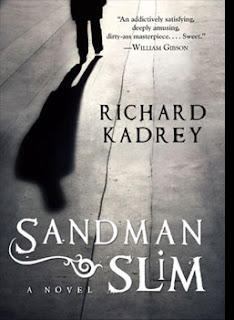 I've barely scratched the surface on this one, but Sandman Slim is terrific.

Let's say you're sort of a snarky, ne'er-do-well, biker magician. (It could happen.)  And let's say your fellow ne'er-do-well biker magicians decide to send you to hell without actually -- uh -- killing you first.  And then, let's say, after a few years of surviving as hell's only living gladiator, you somehow manage to get your ass back to Los Angeles.

You might, be a little miffed at the people who done you wrong. And you might set out to get a little revenge.  And you might be really good at surviving by now.  (There's more to it than that, but that's all you need to know for the moment.)

It's kind of a Steven Brust novel crammed together with a Christopher Moore novel...just...not those things at all.

Just pick it up.

You may recall (hey it was just a few days ago),  I talked about The Magicians by Lev Grossman.  For lack of a better description, I mentioned that it was being called "Harry Potter for adults".  Well, it turned really dark,  a chapter or so after what I had written.  It doesn't lose it's sense of humor nor, of course, it's quite wonderful use of language, but, boy...does it take an unexpected turn.  And while it has a satisfying ending, it's not all unicorn farts and sparkly, cuddly teddy bears at the end either.

HIghly recommended, but don't say I didn't warn you  --- "happily ever after" doesn't necessarily enter into the picture.

Stick around kids.  Soon I'm going to start reviewing books based solely on the covers!  It's gonna be awesome!
Posted by Nathan at 5:27 PM

I also highly recommend Butcher Bird (if you can find it). I'm waiting for Kill the Dead to come out in paperback! Woot!

Steven Brust AND Christopher Morre? I love those guys.

Well, I picked up Pym on your recommendation. I also picked up Poe's Pym for a buck and read it first. I dunno if reading E.A. Poe first helped (cuz just about anything would look good next to that turd), but I liked Johnson's book the whole way to the end.

WV: frishaki - a fried fish mikshake. You know you'd drink one if I dared you... :D

John, I'm glad you liked Pym all the way through. As I mentioned, it lost me in the last third. It was still a good book...just not one for me.

And I'm done with dares that involve anything that lived in water before it was prepared for ingesting. Really.

But you're still up for a dare involving pig uterus? :D

I'm up for any dare involving prime rib. Or chocolate.

Brer Nathan says, "Whatever you do, please don't make me go into a fine steakhouse with yummy desserts!"

Well, will a Chinese place with frog on the menu do? :p