Head-Butt Man: Hero to Oppressed Upper West-Siders, or Unsuspecting Stooge of THE MAN? 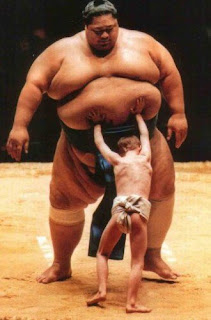 Heroic Production Assistant Holds Back Hordes of Upper West-Siders Who Can Walk Where They Wanna Walk, Motherfucker!
I don't think this got much national press, so you'll be forgiven for having missed it, but, over the weekend, one New Yorker took offense at being asked to wait a moment before crossing the street. It seems he had come upon a movie shoot in progress for Premium Rush, an action movie being shot in the city right now.  The short story is that the production was shooting a scene in which Joseph Gordon-Leavitt, plays a bicycle messenger and he's being chased by someone for some reason or other.  Breffny Flynn (what kind of fucking name is that anyway), got pissed off about being inconvenienced and head-butted the Production Assistant who tried to get him to wait before walking into the street.  The PA was treated for injuries and Breffny (say that three times, fast), was arrested and issued a desk appearance ticket before being released.

The production was shooting a scene in which Leavitt's character is riding southbound on Broadway and doing all of that exciting traffic-dodging stuff that bicycle messengers do.  The camera was, apparently, mounted on a motorcycle tracking the action from the northbound lanes of Broadway.  There are a couple of things to note here.  1.) The article makes it clear that none of the stars were present on set at the time, which would seem to indicate that this was a 2nd Unit or Stunts Unit shooting (i.e. all the most choreographed dangerous shit), and 2.) Since there was action on one side of the road and a camera operating on the opposite side of the road, the production might have needed control of all traffic in the immediate vicinity to prevent...uh...killing and/or maiming a bunch of people while getting the shot.

Depending on who you want to listen to, Breffny is a hero to the masses who are constantly inconvenienced by movies shooting in their neighborhoods (and then, inexplicably, are willing to stand in line for three days to plunk down $20/head to see on a screen), or a menace to Production Assistants world-wide, who are just doing their jobs!  I've seen reports (although I can't find one right now), saying that Breffny is a member of IATSE Local One -- the NY Stagehands Union -- which would make for a delicious bit of irony. ( While roughing in lighting for a revival of Miss Saigon, Mr. Flynn suffered massive injuries when the helicopter from the show's finale was lowered onto his head. Other stagehands had considered warning him to stay out of the area, but chose not to "tell..Flynn... where to go, motherfucker")  The article also states that  "Lafferty’s (the injured PA's) job was to keep the six-block area clear of pedestrians and vehicles".  I'm certain there were a minimum of  4-10 P.A.s doing crowd control on each block, but this just gives me the mental image of Lafferty riding a horse up and down Broadway trying to keep thousands of cats on the sidewalk all by himself.

Anyway, people seem to be choosing sides, but I see a third possibility.  For years, Producers have had P.A.s put up signs at the entrance to filming areas stating that there was filming in progress and that "by entering the area, you consented to having your image used in the movie".  (As a side note, this probably has some legal weight when posted at a clearly definable entrance to some bit of private property, but I've always doubted it's effectiveness when they're just posted on a public street.  Well, that, and they seem a little rude.)  Regardless, we've always, more or less, made do with asking people to hold up a minute or so, and since most people aren't complete douchebags, it's worked out OK.  And sometimes, some douchebag has come along and ignored the PA and made a lot of noise while making sure that his right to walk unimpeded included bashing into c-stands and other demonstrations of his own particular douch-i-ness.  Instances of head-butting have been noticeably rare.  Regardless, in most cases, you're just blowing a take when said douchebag interrupts your ingenue finally kissing the leading guy.

In this particular case, it sounds like the public was being kept out of "the line of fire" as it were.  It's a lot easier to have two stunt drivers avoid any actual carnage when they only have to watch out for each other than it is to have babies, grandmothers and douchebags thrown in for extra points.  But who's to say that Breffny wasn't acting at the Producers' behest?  Hmmmmm?  Maybe they're sick and tired of hiring a bunch of PA's to keep the public out of the shot, much less off the grill of a speeding camaro?  They work for peanuts, relatively speaking, but I can't tell you how many Production Managers have balked at hiring 20 additional PA's for a scene.  Those peanuts add up!  And maybe the Producers want all the on-screen mayhem they can get for the minimum of dollars. (The "maybe" is purely rhetorical.)  The stunt coordinator probably asked for a few more pedestrians to be dodging traffic or getting hit by cars and the Production Manager surely nixed a few of them based on budget.

If only we could put up a few dozen signs near the filming periphery warning people that they "consent to being in the movie and being hit by cars and stuff" by entering the area, everybody would win...the Producers and the "don't tell me where to walk, motherfucker", crowds alike!  (OK, maybe a few PA's would lose out on a few days of work, but they don't even have a union, so fuck 'em!)

P.S.  I had a little difficulty choosing which bit of news to be all snarky about today.  This story had ample competition from the Jet Blue Flight Attendant who had to quit his job before the plane had quite arrived at the gate and the story about the NY cops who showed up at a shootout, and returned fire.  The only reason the original victim wasn't killed is that the cops only managed to hit him 21 times out of the 50 shots they fired.  That's some fine shootin' Lou!
Posted by Nathan at 6:34 PM

Flynn's a douchebag for sure, but I can't help but feel a twinge of sympathy for him. You guys push the limits once you find a good place to shoot. By they way, are you welcome in Chinatown again? :p

Any sentence regarding Flynn that follows the "Yes..but" formula is officially a douchey sentence.

You didn't answer my question. :p

Fuck you John. How's that for an answer?

dedlyce = what you find in your hair after effective lice treatment?

Blessed are the peacemakers, for they will be squarely in the line of fire and protect the true combatants.

Natalie, this is a running joke with Nathan and I. Everytime we're in NY one or the other of us point out the "No Parking" signs from a shoot somewhere in Manhattan. Last time we had lunch, Nathan was cussing becuase a film crew on 3rd Avenue didn't take down the signs after the shoot, and we saw them the day after. A motorist can't read the magic markered dates on the sign from his car, so it makes people even madder for no reason to think that parking is blocked for an additonal day when it's not becuase the crew was too lazy to police the location.

It was because of crap like that that the merchants in Chinatown got a moratorium passed on filming. And as a regular parker in Chinatown, I was extremely grateful.

I still dig Nathan about that.

The twinge of sympathy comes from the fact that, though getting to the store for paint could have waited, the PA was stopping everyone, and I think I'd have been a little pissed if the filming that head-butt guy was pissed about was in front of my front door. Blocking off the entrance to my property when I've got 2 cranky little kids in tow would not have PAs any leverage with me, and probably would have led to a "stop me" if I was told I could not use the sidewalk a block or two from home if one of kids had to get home to pee. But that's yet another reason I do not live in Manhattan, no one is going to make a decision like that for my street without consulting me out here in BFE. You live in the city, you give up some freedom. Them's the breaks.

There's that and the fact that John likes dodging stunt drivers.

Can't say I think stunt drivers belong on a NYC street, ever. :p

We should have a chance to argue about this in person, soon. What are you doing next week? Up for a trip to Flushing?