Make Of This What You Will. 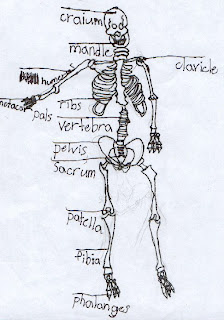 Steve regularly tosses out what he call Story Bones, hence the name of his blog.  The idea is that he posts a sentence, a snippet, a phrase...anything at all, and then makes it clear that it's up for grabs. Here's one from me. I'll abide by "Da Rules" posted on Steve's sidebar.

That part is always the hardest part of all.

Thanks for the shout out, Nathan. Any, BTW, love the drawing. Tomorrow night I begin Anatomy & Physiology II, Electric Boogaloo of Guts. So seeing the skeleton made me laugh.

It's actually a kid's drawing I stole from somebody's MommyBlog.