So, we finally got around to hooking up the Wii!  It is tres-cool -- especially the part where it streams movies instantly from Netflix.  I'm sure a bunch of you consider it old hat, but I think it's more like magic.

And so, it was an unpleasant surprise to discover that Teufel also really likes the Wii.  Specifically, Teufel chose to see how many pieces he could make out of the cord that connects the sensor bar to the console. (Nine, if you care to know.) 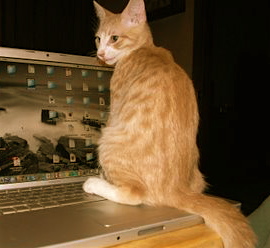 Teufel, at an earlier age, demonstrating his love of techonology.
Not to fear -- you can get a replacement part from Amazon for only $2.99!  And it only costs an additional $6.79 to ship it if you want it in less than two weeks.
Anybody want a slightly used cat?  I'll make you a deal on the shipping!
Posted by Nathan at 1:02 PM

The late, great BJ was also a fan of disassembling electrical cords. Especially speaker wire. But he was never any good at putting them back together.

Frankly I amazed he never electrocuted himself.

My cats are obssessed with attacking and subduing paper towels. They'll climb on the counter to shred the roll that's out, and dart for the pantry to get at the rolls that are still in wrapper. Were they assaulted by a paper towel roll in a previous life?

I spray my computer, electrical and audio cords with pet repellent. Dunno if it works but I think I'm doing something about it. :)