Some Snow To Keep You Distracted.

I haven't posted anything in a few days 'cause...uh...'cause I didn't really have anything to babble about.  I swear I'll post something later tonight (or tomorrow morning), but, in the meantime, here's some shots from our latest snow storm.  If I have to look at the damned stuff, so do you.

BTW, we've had five "major" storms since New Years, including the Blizzard.  The official tally on last night's storm is 17".  I don't think we've set an actual snowfall record yet, but we have already gotten more than four times our normal snowfall for an entire winter.

I love snow, but I'm used to it having a chance to disappear between storms.

It's getting difficult to find anywhere else to pile the stuff up. 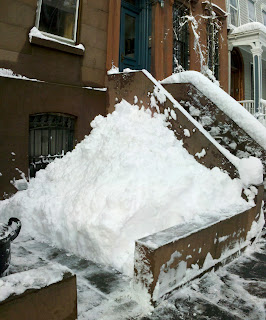 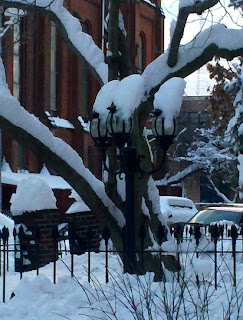 And I'm quite fond of how the snow held the shape at the end of the banister here.

Obviously you need to make snow bricks and build a giant snow fort.

THEN, on TOP of your snow fort, you can make Calvin snowmen.

But thanks for playing.

(I'm gonna watch it melt...from inside.)

Maybe you could put up a giant magnifying glass to help it melt faster.

Or, instead of building bricks, go out and make a bunch of snowballs, wrap them in foil, stick 'em in your freezer, and in the summer you can go out and pelt kids with snowballs (which by that point might be more like ice balls).

Nathan, I still remember fondly our traipse around Brooklyn, including Fort Greene Park full of snow. And now when I hear about Brooklyn Tech, I know where it is! So snow doesn't have to be all bad. But I know about not having any place to put the snow. My snowblower is reaching it's limits. When you can't get the snow up to the top of the dunes, it just falls back down where it started from. And my street is a chasm. Or a canyon. Excavaaaa-ting for a mine... (little earworm for your pleasure)

For a while I thought we were going to have to send in rescue dogs to find out if you were buried under all that snow!


mentotr: the tottering walk of an old Mentat.