You may have read that Tampa International Airport recently had to close Runway 18-R to rechristen it 19-R.  This because the 18-R designation referred to the runway's magnetic compass heading.  In short, the Magnetic North Pole is moving toward Russia at approximately 40 miles per year, so the magnetic compass heading has shifted by 10º since it was originally built.

Sciencey people are explaining the Pole's movement as a "naturally occurring phenomenon".  Don't buy it!  Remember, these are the same people who want you to believe that you Evoluted from some kinda monkey-sloth and that the "Globe is Warming" - have you been outside today?

Polybloggimous has uncovered incontrovertible evidence that the Russians are actually behind this cataclysmic event.  Polybloggimous, on condition of anonymity, spoke with a man named "Dimitri" (not his real name), in Brighton Beach, Brooklyn.  Dimitri is the son of the sister of a 2nd cousin who once met a woman in Minsk, who had once dated the next door neighbor of a member of the infamous Lubyanka's cleaning staff. Dimitri explained that Project Norrrsky Polanski had been originally given Kremlin approval in 1954 as part of the, then USSR's Strategic Defense Program.  The guiding concept was conceived by Joseph Stalin shortly before his death in 1953.  Transcripts of a bedside meeting with top Government Officials record Stalin saying, "If we can move the North Pole into Soviet Territory our bombers will be able to fly downhill all the way to their targets in America while theirs will be forced to fly uphill.  Surely you can all see the advantages in this!"  (After further discussion, the transcript shows that the meeting came to an abrupt end when a servant brought Stalin a blue bib instead of his customary red linens and he shot her on the spot. The transcript ends with Stalin saying, "Now it's red.")

The first years of the Project saw great frustration and few successes.  Early attempts involved large magnets infiltrated into Inuit villages in the extreme north of Canada.  It was intended that these magnets would push the pole to the Soviet Union while magnets in Siberia would simultaneously be pulling the pole toward its intended destination.  These attempts merely resulted in some previously unexplained "geological events".   The only lasting result from these experiments was that Kaspar Illionovich Dostoyevsky (no relation to Fyodor), who was a low ranking operative on the Project, came out with a line of magnetic jewelry in a fit of boredom and went on to make millions selling them to Americans for their "healthyfulness properties".

The project was almost abandoned in 1977, but Leonid Brezhnev pointed out that "Santa Claus' elves were clearly an exploited class and the Soviet Union owed it to them to bring them to the bosom of Mother Russia.  Futhermore, we'll get our presents first!"  Efforts were redoubled.

The project hit another major snag in the aftermath of the dissolution of the Soviet Union, but Government Officials, jealous of the popularity of Four Corners U.S.A. as a tourist destination forced the project to continue.  The goal of the project was redefined, stating, "Tourists from all over the world will flock to the North Pole for the opportunity to see the needles on their compasses point south no matter which way they turn...or maybe the needle spins uncontrollably...I'm not sure which, but tourists will flock there to see it; and they'll be spending RUBLES...MWAHAHAHAHAHAHA!"

Ostrov Novaya Sibir was chosen as the Pole's destination and, once again, money and manpower were poured into the initiative. 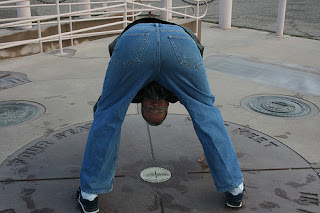 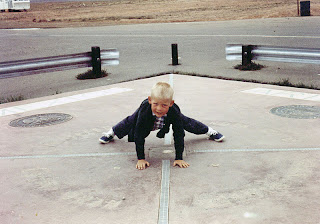 Four Corners USA has remained an economic force to be reckoned with due to a desire for Geographically amusing photographs while Ostrov Novay Sibir's potential has remained sadly untapped. 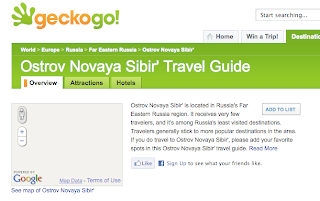 It would appear now, however that Russia's plans are nearing fruition.  Leading ConspriScienceGuys offer different theories on how the Russians are going about it, but most agree that the Pole is being moved by use of "tow-boats and/or Shamu". 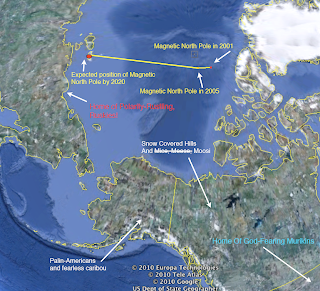 Reactions have varied around the world.  In Finland, a movement has sprung up demanding the World Court declare a policy of "Polar Neutrality". The prevailing attitude among Finns seems to be that they live "far enough North already".  Kim Jong-il, in an unusual public statement applauded the change.  "Now we'll be North AND East Korea", he said. "Historically, those are both good Communist directions."  Canadians, on the other hand, have greeted the news with nonchalant shrugs.  One Provincial (oops-my ignorant bad) Territorial Official from Nunavut, when informed of the situation said, "Oh? Well, we weren't doing that much with it anyway."
Sarah Palin, oddly enough representing the extreme left end of the American Heartland said, "It's another one of those evil Commie plots.  Well, believe you me; I know exactly what direction my back porch faces and no matter which way they try to turn it, I'll still know which way to look to keep an eye on them."
Polybloggimous will update you as the situation warrants.
Posted by Nathan at 2:37 PM

Actually, this one is my fault.